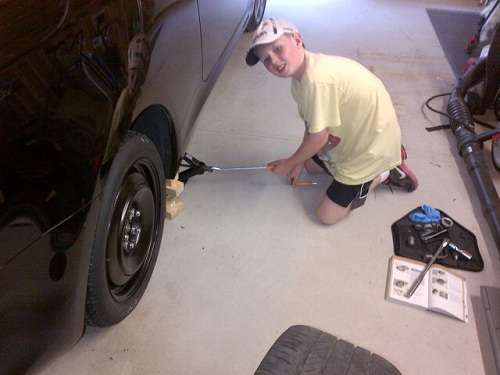 Fully on third of those who will get a tax refund this year say they will spend all or much of it on their vehicle. See how they will put the money to use here.
Advertisement

Many taxpaying Americans over-pay their throughout the year to the federal government. The bad news is that is money they might have used to some purpose, such as savings with interest. However, bank interest in American is a not too funny joke these days, so it is no longer really a bad idea to overpay. If you were wondering what taxpayers are using their refunds for this year, eBay Motors has the answer. In fully a third of those receiving refunds a survey revealed that they will use the money on their ride.

eBay Motors has commissioned this study each year for the past few and the answers to the question “what will you do with your tax refund?” have always had an automotive theme. To ensure the study does not just focus on the company’s customers alone, the study is done out-of-house and has over 5,000 respondents.

The survey found that most of the respondents who are going to use their refund for automotive related purchases will use about 35% of it that way. That totals about $1,000 per person. Here is a breakdown of how these taxpayers plan to use the money:

The new car purchase category explains something you may have noticed. About this time of year we begin to be bombarded with advertisements from manufacturers and dealers offering to ‘Match your tax refund” or some similar pitch reminding the taxpayer-customer that they are getting some “free” money back and they should make the most of it with a special new-car deal. This year those advertisements may have good results because about half of the folks who are planning to use their refund on their ride plan to spend significantly more of it than respondents to the survey had in the past. Bryan Murphy, head of eBay Motors commented on this seasonal effect saying in a press release today “With cars on the road remaining at historic ages, the data indicating that many Americans are spending more of their tax refunds on their vehicles this year makes a lot of sense. We traditionally see activity on eBay Motors rise during this time of year…”

Not all checking accounts pay interest these days, and even “high yield” savings accounts can have interest as low as 0.2%. The interest for one year on a $3,000 tax refund, had it been banked would be less than $6. However, had that extra amount been applied to additional payments on an existing car loan, the return on those earned dollars could have been as high as the rate of the car loan, for example 5%. Many car owners paying loans don’t realize that there is no pre-payment penalty on almost all loans and that the early payments come directly off of the principal of the loan.

It seems many Americans are making a frugal choice to maintain their vehicles. What would you do to your car if you used a refund to make it better? Comments welcome below.