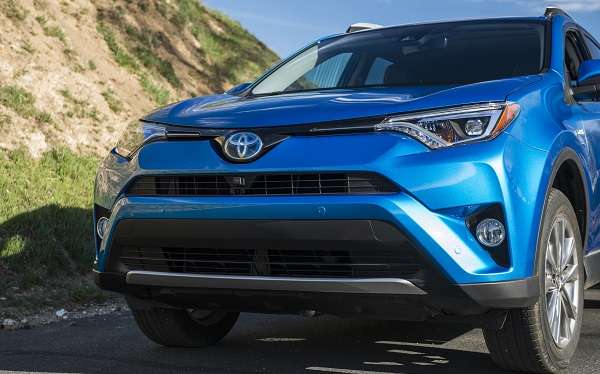 The new 2016 Toyota RAV4 is far and away the compact crossover class leader in fuel economy. Its 33 MPG combined rating has been loaded up and approved by the EPA at www.fueleconomy.gov. Compared to the excellent Honda CR-V (27 MPG) and Subaru Forester (27 MPG), the new RAV 4 is dramatically greener.

Green is not only about mileage, though. CO2 production is a key element in a vehicle’s green rating. Here the RAV4 Hybrid AWD is unbeatable. It produces just 270 grams of CO2 per mile. The CR-V produces 323. The pricey Audi Q5 Hybrid produces 337, assuming Audi is being truthful, which we no longer take for granted.

Just for grins and giggles, we also looked at the 2015 Golf SportWagen diesel. Not really a fair fight given that the Golf is much lower to the ground, does not have AWD, and since we know that the 2016 VW 2.0-liter diesel numbers presently at Fueleconomy.gov are invalid (according to EPA). Still, the VW folks claimed a 35 MPG combined rating. Since diesel costs more than regular unleaded, even at that inflated rating the Golf costs more to operate ($1,050 according to EPA versus the RAV4 hybrid at $1,000). The Golf also uses more petroleum per year than the RAV4 hybrid (10.9 barrels versus 10.0). Finally, the Golf wagon's 289 grams per mile of CO2 are still higher than the RAV4’s 270.

The 2016 RAV4 will come to market in the next few months at a starting just under $30K and rising to about $34K with every option. There is one other crossover on the market that could be argued is greener than the RAV4. That would be Tesla’s new mid-size Model X that starts at about $80K and with all the goodies rises to about $144,000.