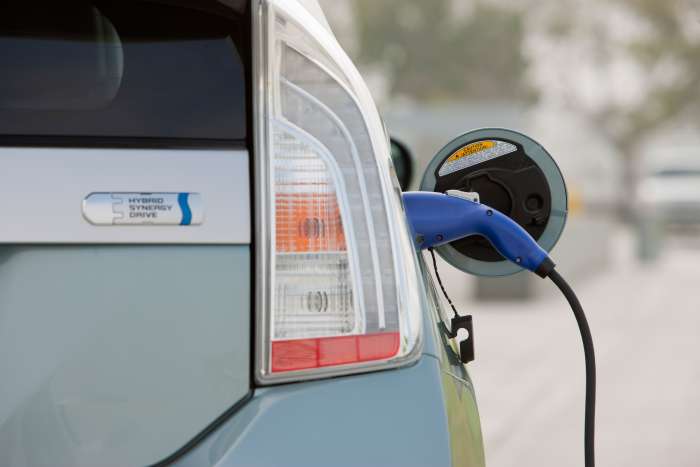 Price erosion in the electric vehicle market continues. Buyers of 2014 Prius Plug-in Hybrids will pay much less than those who bought in 2013 for the same content.
Advertisement

The 2014 Toyota Prius Plug-in Hybrid has broken the $30K barrier and will have an MSRP so low it will be hard for many to justify a fully electric car. Following in the footsteps of the EVs, which have seen huge price erosion in the past 18 months, the new Prius Plug-in Hybrid (PIH) has dropped in price as performance, value, and features have gone up or stayed the same. Buyers of 2014 models will see a drop in price of about 15% depending on the exact model chosen.

The 2014 Prius Plug-in Hybrid will come in two basic flavors. The base model is similar to a Prius Three and comes with such things as heated seats, remote climate operation (to prepare the cabin before entering), Toyota Care (free maintenance for a limited number of years), 10-spoke alloy wheels, and of course the extended fully EV operating range. Buyers of 2014 Prius PIH models will pay $2,000 less than those who bought the car in 2013 or 2012. The new MSRP is $29,990.

The 2014 Prius Plug-in Advanced has more content, but has also had its price slashed. This model adds Entune with Navigation and JBL audio, Softex trimmed, 8-way power adjustable heated seats, Heads-up display, and Safety Connect. There is also an optional Technology Package for customers who want more goodies. The added features include DRCC (Dynamic Radar Cruise Control, PCS (Pre-Collision System) which recently made headlines, LED headlights (now standard on the new 2014 Corolla) and fog lights. The 2014 Prius Plug-in Advanced will have an MSRP of $34,905. Buyers who purchase the 2014 will pay $4,620 less than customers who bought that car in 2013.

These new low prices will begin this month (October 2013) and vehicles are expected to arrive in showrooms in November. As a plug-in hybrid electric vehicle, the buyer of a new Prius Plug-in Hybrid qualifies for a tax credit from the federal government of $2500. Buyers of these vehicles in most markets, such as California, will enjoy additional taxpayer funded rebates as well. The State of California’s Clean Vehicle Rebate Program (CVRP) offers buyers a $1,500 kick-back. The drivers of the vehicle will also be able to drive in the now incorrectly named “High Occupancy Vehicle” lanes.

The Prius Plug-in Hybrid is available in 15 coastal states. Dealers in the middle of the country do not sell this car, which is not unusual for EVs and partial electric vehicles. Part of every electric vehicle's pricing and marketing strategy, regardless of the automaker, is formed around mandates and rebates paid by the state of California and other entities to manufacturers. Toyota notes that there may be special deals on any leftover 2013 Prius vehicles in anticipation of the dramatic price drop.