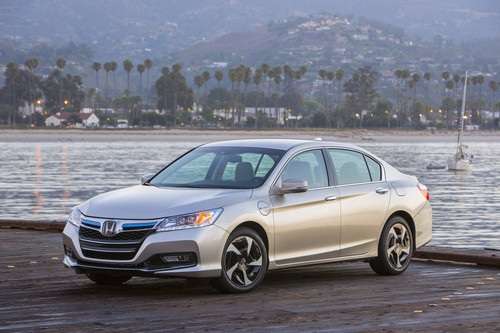 2014 Honda Accord Hybrid will be built in the USA

All Accords are now being built in the USA and Honda has confirmed that this new addition to the model line-up will be built in Ohio. The huge expansion shows that the mid-size sedan market is headed towards primarily hybrids.
Advertisement

Honda has embarked on a large expansion of its Marysville, Ohio production facility to accommodate the all-new 2014 Honda Accord hybrid’s production. The plant is being lengthened and expanded by 95,000 square feet. According to a press release today, Honda will invest $ 23,000,000.00 in the plant specifically for upgrades needed to produce the hybrid. 50 new jobs have been created to augment existing production workers on the line.

Will The 2014 Accord Hybrid Be Profitable For Honda
Honda’s expansion in Marysville, Ohio is no small undertaking. If the profit on a Honda Accord hybrid is approximately $1,000.00, that means that Honda will not break even on this production expansion alone (never mind engineering, marketing, and payroll expansion) until it has produced more than 300,000 Accord hybrids. Combining in all costs, that number may be as high as half million vehicles before the model pays off.

This will be the first hybrid made in the Ohio plant and Jeff Tomko, plant manager of the Marysville Auto Plant explained why Marysville was selected as the manufacturing plant. "With more than 30 years of continuously building eight generations of the Honda Accord close to our customers, our team now is using its experience and flexibility to add this sophisticated Accord Hybrid model. At the same time, we are continuing with our commitment to manufacture new models in Ohio, along with the resulting growth in jobs." That and the fact that the other Accord facilities are now making other models is also a reason. The Russels Point facility will make the hybrid’s CVT transmission. In total, expansions to that facility have reached a quarter of a billion US dollars, of which about $90,000,000.00 were for Accord CVT transmissions. The CVT is used in all four cylinder Accords with automatic transmissions. Only the V6 accord now has an automatic, geared transmission.

The New 2014 Accord Hybrid
The all-new 2014 Honda Accord hybrid will be powered by a 2.0 liter gasoline engine running the Atkinson cycle for better efficiency. In addition two electric motors will power the vehicle when the hybrid electric drive is engaged. Honda will also use this same technology as part of the new plug-in hybrid Accord.

These massive investments by Honda show that debate is now over in Honda’s mind as to which direction the market is headed in the mid-size sedan market. The answer is clearly towards hybrids.

Model shown in photo is a Plug-in Hybrid Accord