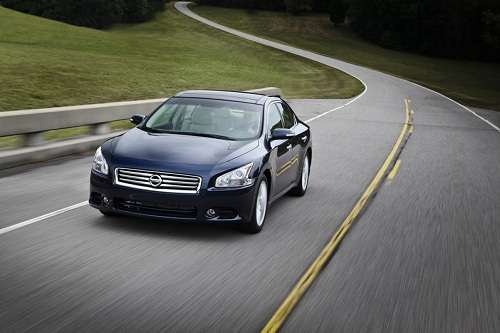 The Nissan Maxima is so good it would fit right in with Infiniti, but the front drive sports sedan is still part of the Nissan family.
Advertisement

Nissan today issued a press release with details of the 2013 Maxima’s pricing. The overview from Nissan illustrates quite clearly how unique the Maxima is in the automobile market. The reason for this has a lot to do with marketing and how a sports sedan is defined.

Define Sports Sedan
To many enthusiasts a sports sedan can only be rear-wheel drive. There are many reasons for this and tradition is one aspect. However, the truth is that when a front drive vehicle has ample torque, and more than enough horsepower to run powerfully, that energy being delivered through the front wheels changes the steering of the car. The worst result can be torque steer. Many manufacturers have gone to great lengths to tame torque steer and there have been dozens of innovations to help offset it. The fact remains that it still happens. In addition, there is a different feel to a car that is being pushed ahead as opposed to pulled ahead.

Maxima Handling and Performance
The 2013 Nissan Maxima drives wonderfully. It handles like a sports sedan once under way and its luxury credentials need not be defended. But it is still a front drive vehicle. Infiniti, Nissan’s “Premium” product brand used to market a car called the I30 and later the I35. It was very similar to the Maxima. Front drive and V6 power. Infiniti later dropped the vehicle from the line-up. Nissan/Infiniti has never said it bluntly (as far as we know) but it made the wise decision to focus on real performance and rear and all-wheel drive platforms. That pushed the Maxima up in stature at Nissan, making it a rear-drive Infiniti in all but name.

Maxima vs Competition and the Altima
The 2013 Nissan Maxima SV is a V6 sedan with a very sporty ride and sports car like cockpit. It also has all of the luxury features one would expect from a near-luxury sedan like the Acura TL or Lexus ES350 (which are both premium brand, front drive sedans). The SV is a special edition, which often foreshadows a model update to come in a following year. Priced at $35,080, this vehicle is within a few dollars of the Acura TL and ES350. At this price point these vehicles do not have the full Nav. treatment. Good luck finding one in stock without it. Added in, they all bump up to $40K. One problem for the Maxima is that Nissan’s new Altima is VERY similar in content, looks, and performance to its sibling and is much less expensive. The new Maxima SV value package is one attempt to show more value and content in the top of the line Nissan Maxima sedan.

Nissan’s Maxima is refined sedan that has many luxury and sporting elements. For those looking for a front drive Infiniti, or an Altima with one more lathering of refinement it may be just the answer.

Tesla Contemplates A New Strategy for China Retail even As Sales Boom
Jay Leno on Elon Musk & EVs: “I Think He Should Get ... Credit"
END_OF_DOCUMENT_TOKEN_TO_BE_REPLACED