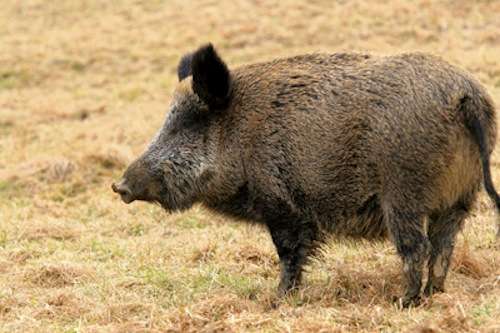 Motorists navigating Texas’ new 85-mph highway are encountering a surprising problem: wild hogs. According to Austin’s KXAN News, there were four collisions between hogs and cars reported on the very first night the road was open. Three of the crashes were in the Lockhart city limits, while the fourth occurred in Caldwell County. No serious injuries were reported, but one vehicle was totaled.

Lockhart Police Chief Michael Lummus explained the problem stating: "85-- they're on (the hogs) even before they know they're on them. Anyone that's ever struck a deer, they know that they're in the ditches and you don't see them until they're in front of you and it's the same with these (animals). But they're even lower (to the ground and hard to see)."

As for safety tips, Lummus encourages drivers to slow down at night, even though the speed limit is 85-mph. If a driver approaches a wild hog or any other animal on the highway, drivers should keep driving. “You’re better off if you hold your course and go through it where you have a good grip on the wheel," said Lummus.

Feral hogs cause about $500 million in total damage every year in Texas. As a result, The Texas Department of Agriculture has organized the Hog Out County Grant Program, which awards counties points for getting the most hog tails and attending wild boar education courses. The winning county receives $20,000 in state grants, while the second- and third-place counties earn $15,000 and $10,000 respectively. Last year’s contest accrued 12,600 tails.

Texas permits hunters to kill wild hogs year-round without limits. Hunters also have the option of capturing hogs alive and taking them to slaughterhouses to be processed for food. Additionally, thousands more are shot from helicopters.

There are approximately 2 million feral hogs in Texas, which makes up for 50 percent of the total U.S. feral hog population. They are presently found in nearly every county throughout the state.

Hogs have been in Texas since the late 17th century and were actually vital livestock to the early settlers. Although one-time domestic animals, hogs became feral over time due to escaping or being let into the wild. A highly adaptable animal, feral hogs can live in forests, brushy lands, deserts and swamps. Aside from being adaptive, wild hogs are also highly reproductive, which makes the task of controlling the population that much more difficult.

Greg C wrote on November 8, 2012 - 6:26pm Permalink
Texas is the greatest place on earth to hunt wild pigs. I wonder if it would be with it to fence the side of the highway in from wild pigs. You can get more info on wild pig hunting in Texas at HuntWildPigdotcom