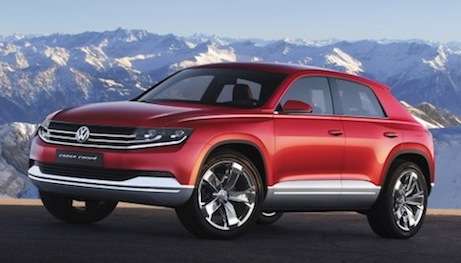 Volkswagen is set to debut the all-new Cross Coupe TDI Hybrid on Tuesday, March 6 at the 2012 Geneva Auto Show. The Volkswagen Cross Coupe TDI Hybrid is an updated version of the plug-in hybrid unveiled at December’s Tokyo’s Motor Show. The original Cross Coupe, which debuted in Japan, featured two electric motors and a turbocharged direct-injection (TSI) gasoline engine. Unlike the Tokyo version, the redesigned Cross Coupe contains two electric motors and a turbocharged direct-injection (TDI) diesel engine. So what accounts for the alteration? Volkswagen decided to replace the gasoline-electric hybrid with the diesel-electric plug-in hybrid due to its increased fuel efficiency.

The upcoming Cross Coupe runs of Volkswagen’s all-new Modular Traverse Matrix (MQB). Taken from the German ‘Modularer Querbaukasten,’ the MQB system was designed to simplify the design and assembly of vehicles containing traverse-mounted engines. Introduced last month, the all-new system has helped to standardize numerous vehicle parts and components, making it simpler to build different models on the same platform, regardless of brand.

Overall, the Cross Coupe is capable of accelerating from 0-60 mph in 6.5 seconds and 800 miles of travel on a full tank of diesel fuel, with batteries fully charged. On electric power alone, the SUV is able to travel approximately 28 miles, based on 75 mph speeds.

Though there is no release date on the horizon, Car and Driver contends that the Cross Coupe will ultimately see production, because Volkswagen has created two different concepts for two different auto shows. Also, Volkswagen would benefit from making the Cross Tour SUV available to the general public, because it is currently craving fuel efficient alternatives.

Stay tuned for more updates on the Volkswagen Cross Coupe TDI Hybrid when it debuts on Tuesday, March 6 at the Geneva Auto Show. Volkswagen will also be unveiling the new GTI Cabriolet at this week’s auto show. The GTI Cabriolet is a Europe-only model.

Nicolas Zart wrote on March 5, 2012 - 4:29pm Permalink
It makes you wonder why we've had to wait so many years for something that seemingly makes so much sense, a diesel engine on a hybrid platform. It's one of the perfect match, that and using a turbine on a plug-in hybrid drivetrain. What is even better about this concept is that it takes what the German do best, diesel engines and couples that technology to a hybrid drivetrain makes it a very efficient car. Now when will we see a plug-in hybrid version?
Confused wrote on March 22, 2012 - 11:52am Permalink
Inconceivable that this is only at the concept stage. Diesel has been around how long? Hybrid is new, but well in to production. WTF?!?!?!? Diesel in general? Don't be fooled in to thinking that VW has cornered this market. Almost every foreign manufacturer has diesel versions of their most popular models ( Honda Accord- never heard of that car, is that a concept car?), but you wouldn't know that here in the good ole US of A. Oh, but it's probably an environmental issue, WRONG!!! Clean diesel technology, arguably as clean if not cleaner than gasoline. What gives? Someone, anyone, please explain.

Toyota's First EV Will Have a Name of BZ: Toyota BZ
First Videos From Inside The Boring Company's Las Vegas Loop
END_OF_DOCUMENT_TOKEN_TO_BE_REPLACED