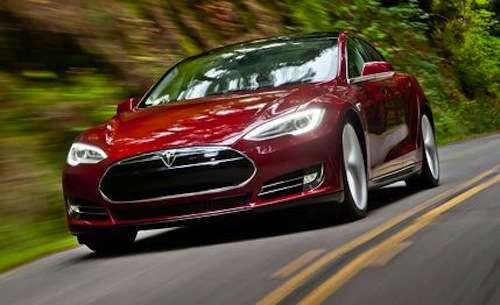 This marks the first time that a vehicle not powered by an internal combustion engine has received Motor Trend's COTY award.
Advertisement

The Model S beat out 25 models and 45 total cars including the Ford Fusion, Honda Accord, Chevrolet Malibu, Nissan Altima, Porsche 911, and Lexus GS. Each of the 45 vehicles was judged based on six criteria: advancement in design, engineering excellence, efficiency, safety, value, and performance of intended function.

Of the six categories, the Tesla Model S particularly earned praise for its inventiveness, according to Motor Trend. “The mere fact that Tesla Model S exists at all is a testament to innovation and entrepreneurship, the very qualities that once made the American automobile industry the largest, richest, and most powerful in the world,” said the magazine.

Motor Trend editor-in-chief Edward Loh added: “To be the first car in the 64-year history of the award to be powered by something other than gasoline must mean it is very special.”

Just how the honor impacts the future success of the Model S remains to be seen. In the past, Motor Trend’s Car of the Year award has predicted the success of several newly released vehicles like the 1986 Ford Taurus and the 2004 Toyota Prius. On the other hand, past award winners like the 1983 Renault Alliance did not fare well in years to come. The jury is still out on 2011 Car of the Year winner, the Chevy Volt.

Regardless of the award’s influence, it certainly adds to the prestige that presently surrounds the Tesla Model S. Aside from the aforementioned Automobile Magazine’s Car of the Year award, the electric vehicle also earned Yahoo! Auto’s 2013 Car of the Year award and was named to TIME Magazine’s “Best Inventions of the Year 2012” list. Most impressively, the Model S was the only automobile to be included on TIME’s list.