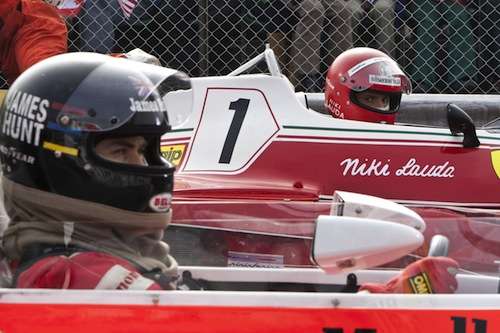 Ron Howard's 'Rush' looks to thrill racing and non-racing fans alike with its compelling story and dazzling race scenes. Keep reading to check out the debut trailer below.
Advertisement

Although NASCAR is one of the most-watched sports in the United States, F1 has never really grabbed hold of the average American spectator. Despite it lack of popularity amongst Americas, F1 may soon find an audience thanks to director Ron Howard’s new film Rush, which chronicles the rivalry between drivers Niki Lauda and James Hunt during the 1976 F1 season. The biographical film stars Daniel Brühl (Inglourious Basterds) as Lauda and Chris Hemsworth (The Avengers) as Hunt.

No stranger to sports films, Howard also helmed 2005’s Cinderella Man, which centers on James Braddock, a washed-up boxer who overcomes all odds to become a champion in the 1930s.

Rush marks the second time Howard has directed an automotive-related film. In 1977, Howard wrote, directed and starred in the cult movie Grand Theft Auto. Marking Howard’s directorial debut, the film centers on a young couple that engage in various instances of grand theft auto while traveling to Las Vegas to get married. The road movie features a number of classic vehicles including a 1959 Rolls-Royce Silver Cloud I, which is totally demolished, living up to the movie’s tagline: “See the greatest cars in the world destroyed!”

Despite Howard’s successful track record, the financial success of Rush is not guaranteed. F1 films have historically been hit or miss at the Box Office. Hollywood legend Steve McQueen’s passion project Le Mans was a financial disappointment in the early 1970s, as was Sylvester Stallone’s F1 flick Driven in 2001. In terms of Box Office totals and critical recognition, the most successful F1 movie in history is Grand Prix, starring James Garner and Eva Marie Saint. One of ten highest-grossing films of 1966, Grand Prix won thee Oscars.

Look for Rush when it hits theaters on September 30, 2013 in the US. British fans will have the chance to see the film one week earlier when it premiers in the UK on September 13.