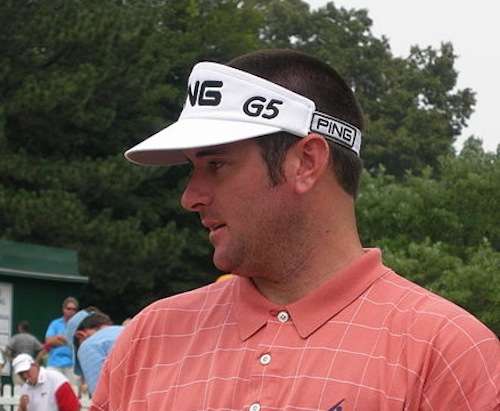 Watson, winner of the 2012 Masters, reportedly drove around for nearly 40 minutes, because he was being followed by another vehicle.
Advertisement

PGA star Bubba Watson may be adept at driving a golf ball down a fairway, but how is he driving behind the wheel of a car? Unfortunately for Watson, the golfer and his family were forced to drive for a total of 37 minutes on Tuesday night, because a car decided to pursue his vehicle. The strange turn of events occurred in Columbus, Ohio, where Watson was in town for the Memorial Tournament. Watson and his wife were headed back to their rental home after having hosted a Christian music concert in downtown Columbus.

"A car chased me," said Watson, who shot a 74 in Friday's second round at the Memorial. "Angie was driving. She had to pull over. I switched to driving so I could drive through someone's yard if I had to. But we had to drive away from our house, the house we rented. We drove for 37 minutes."

Not surprisingly, the concerned Watson decided to call his caddie, Ted Scott, to see if Scott could somehow derail the pursuing vehicle.

"Teddy was trying to find me in his car so he could block him," said Watson, who along with his wife recently adopted a child. "When you start dealing with that, when you have the kid with you, it's not a good situation."

Determined not to let the pursuant get the best of him and his family, Watson proceeded to drive around until the vehicle finally gave up.

"We kept driving around and they finally gave up," Watson said. "I was going to keep driving until we felt safe again. That's the first time that's ever happened."

The golfer has stated that he and his wife have been looking for house in the exclusive Isleworth community in Orlando, Florida. Interestingly, Isleworth is a gated community with superior security. It’s no wonder Watson would want to live in a gated community after a frightening late night car chase. Fellow PGA pros like Tiger Woods, Darren Clarke and Mark O’Meara have all lived in Isleworth.

News reports have not indicated what type of car Watson was driving on Tuesday, but the golfer owns and frequently drives his “General Lee” 1969 Dodge Charger from Dukes of Hazard during tour events. Watson purchased the iconic car two years ago for $110,000.

Watson is currently ranked fourth in the Official World Golf Ranking. Watson has four PGA Tour victories, including a sudden death playoff victory against Louis Oosthuizen at the 2012 Masters Tournament.