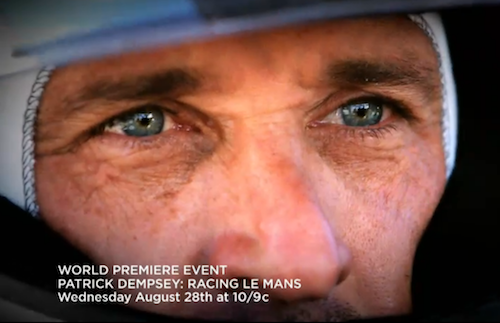 Patrick Dempsey: Racing is my passion, not acting

The producers of Grey’s Anatomy may want to keep star Patrick Dempsey off the racetrack, because the actor said in an interview that racing gives him a thrill that acting can’t deliver.

On Thursday, the actor and racecar driver was on hand at the Television Critics Assn. Press Tour to talk about his new Velocity documentary Patrick Dempsey: Racing Le Mans, which follows the actor tackling France’s legendary 24-hour car race.

Not surprisingly, Dempsey primarily discussed his love for racing, but he also found the time to express how monotonous it can be to star on a show for nine years to TODAY.com.

“Work on a TV show doesn’t change,” said Dempsey. “In a race, it changes constantly, every lap, every corner, every moment of that day. And that’s very exciting. And it keeps me alive. And then I can go back to work and enjoy it.”

Dempsey admitted that he’s not necessarily bored with the long-running ABC drama, but it just doesn’t challenge him in the same way as being a racecar driver does.

"When you're on the show, coming up on 200 episodes, it's about surviving, Dempsey said. “There's not a lot of homework that goes into it. You learn your lines and try to stay present and try not to get caught acting. I'm glad I have the gig, but it's not the same as being in a race car."

The actor also added that there’s a “purity to (racing) that’s missing from the work I do as an actor.”

Despite the fact that acting does not fulfill Dempsey in the same way that racing does, the actor currently has three films in pre-production. In addition to being signed on for a tenth season of Grey’s Anatomy, Dempsey is also set to appear in Wonderful Tonight, Mission: SOP, and Enchanted 2.

As for racing, Dempsey and his Dempsey Del Piero Racing team finished fourth in their class last month at the 24 Hours of the Le Mans. Dempsey and his co-drivers Patrick Long and Joe Foster had a legitimate shot at winning the race, and actually led the race twice. The trio was the only All-American team in the race. Dempsey previously competed at the 24 Hours of the Le Mans in 2009, where he finished ninth.

The actor turned racer has competed in numerous high profile races including the Rolex 24 at Daytona sports car race, the American Le Mans, and the Tecate SCORE Baja 1000 off-road race.

Patrick Dempsey: Racing Le Mans premiers on Wednesday, Aug. 28 at 10 p.m. on Velocity. Check out the trailer below.