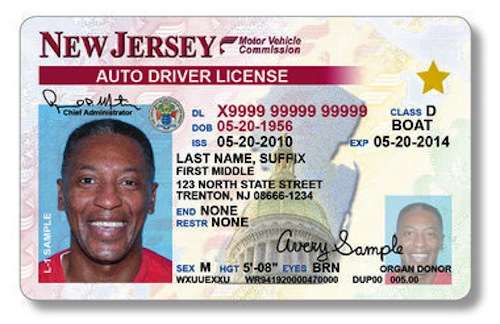 New Jersey drivers may soon be sporting a frown, because the New Jersey Motor Vehicle commission has issued a ban on motorists smiling in their driver’s license photos.

According to USA Today, the Garden State has banned drivers from making big smiles because they may interfere with the state’s new facial recognition software.

Despite going to effect in January, the restriction was mostly overlooked until earlier this week when 38-year-old Velvet McNeill made headlines contesting the new law. According to Philly.com, the Sicklerville resident stormed out of the Cherry Hill Motor Vehicle Commission office after she was told not to smile in her driver's license photo.

“Why should we all look like androids, looking mopey?” said McNeill to Philly.com. I know there are some people who don’t have good driver’s licenses, but I actually keep all mine.”

In fact, McNeill is the proud owner of six driver’s licenses, which represent the different states she has lived in. For McNeill, her license photo is all about self-expression. “Your picture means a lot; it’s who you are,” McNeill added.

Although she upset, McNeill gave the office’s staff a chance to explain the ban. McNeill decided to leave the Cherry Hill Motor Vehicle Commission office, because no staff members could sufficiently explain the new law.

While the ban may annoy motorists like McNeill, the intent behind it is admirable, according to the New Jersey Motor Vehicle Commission. Exaggerated facial expressions may confuse the system, rendering it useless.

“That could be someone trying to steal someone else's identity to get insurance benefits, or someone trying to get out of a DUI by getting a license under another name,” said Horan, spokesman for the New Jersey Motor Vehicle Commission. "This helps us weed out fraud." That said, Horan contends that slight smiles are fine, but “Hey-I-won-the-lottery-type smiles” are not allowed.

So how is facial recognition software utilized in New Jersey’s neighboring states? Even though a similar program is in place in Pennsylvania, “smile/no-smile is not a problem,” according to Jan McKnight of the Pennsylvania Department of Transportation. “You can smile in Pennsylvania,” she added.

Aaron Turpen wrote on September 22, 2012 - 1:34pm Permalink
They gonna outlaw bedhead, hangover eyes, and "if this stupid DMV wait takes any longer, I'm going postal" red-faced anger too?
Anonymous wrote on September 23, 2012 - 12:27pm Permalink
So flipping off someone has been proven in court to be a form of free speech, smiling is definitely a way of speaking that your happy in a form of human body language. This law is a violation of free speech. if someone wants to smile they can. Who makes these decisions, who cares if it violates a face recognition software that shouldn't be in place in the first place. It starts with face recognition software, and already it turns into not being able to smile. Get your priorities straight law makers, this is embarrassing to even be a topic.
we beef wrote on September 22, 2012 - 9:45pm Permalink
Ahhh yes Big Brother encroaching in all areas of our lives, even emotional reactions in the effort to "protect" us.