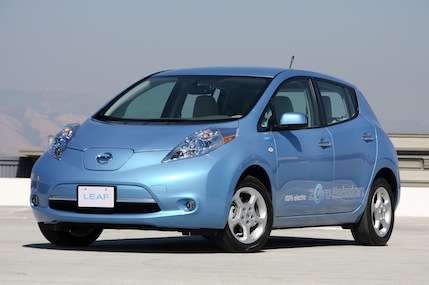 Nissan North America is recognized for being a trailblazer in increasing energy efficiency and reducing vehicle emissions.
Advertisement

Nissan North America has just received the U.S. Environmental Protection Agency’s (EPA) 2012 Energy Star Sustained Excellence Award, which recognizes environmental leadership through promoting energy efficiency. Specifically, Nissan is being honored for its continued commitment to smart energy management, their ability to measure and track progress and its effort to communicate energy efficiency to a wide audience. The EPA will officially recognize the automaker at an awards ceremony in Washington, D.C. on March 15.

Established by the EPA in 1992, Energy Star is an international standard for energy efficient products. It was first introduced as a U.S. program, but has since been adopted in Australia, Canada and Japan amongst others. Products donning the Energy Star label generally use 20-30 percent less energy than required by federal law. Nearly 20,000 organizations are partnered with Energy Star, including Nissan, who became an associate in 1996.

“Nissan is committed to partnering with ENERGY STAR in our efforts to increase energy efficiency and reduce the environmental impact of manufacturing with the highest quality vehicles sold in North America,” said Bill Krueger, Vice Chairman, Nissan North America. “These efforts align with our global strategies of zero-emission leadership and corporate social responsibility to employees, stakeholders and customers.”

Nissan’s contribution to energy efficiency is mainly attributed to the company’s all-electric Nissan Leaf. Introduced in 2010, the Leaf is a five-door hatchback EV that boasts an EPA combined fuel economy of 99 mpg. The Leaf is a zero emissions vehicle that contains no tailpipe. It has received numerous green energy awards including the 2010 Green Car Vision Award by the Green Car Journal, Popular Mechanics’ 2010 Breakthrough Award, Mother Earth News’ “Best Green Cars” of 2011, and was ranked in the Kelley Blue Book Top 10 Green Cars for 2011.

Not only has Nissan been innovative in energy efficiency with vehicles like the all-electric Nissan Leaf, but the automaker has also revolutionized the means in which cars are transported. In January 2012, Nissan introduced the Nichioh Maru, a more energy efficient coastal car carrier that transports vehicles and parts from Japan. Built by Shin Kurushima, the new car carrier was installed with solar panels and is powered by an electronically controlled diesel engine. It also uses LED lighting throughout the ship and is painted with low friction coating. In comparison to existing car carriers of a similar type, the Nichioh Maru achieves a fuel reduction of nearly 1,400 tons per year, which translates to an annual decrease of 4,200 tons of CO2 emissions annually.

The 2012 Sustained Excellence Awards are given to a select group of organizations that have demonstrated exceptional leadership in energy efficiency. Winners have decreased greenhouse gas emissions through setting ambitious goals and utilizing unique approaches. Aside from the automotive industry, Energy Star recognizes energy-efficient products, services, homes and buildings in the commercial, industrial and public sectors.

Tesla-Funded Research Reveals One of The Biggest Mysteries of EV Battery
Tesla Tesla Buyer Nets a Whopping $12,000 Discount After Asking for Reduction
END_OF_DOCUMENT_TOKEN_TO_BE_REPLACED