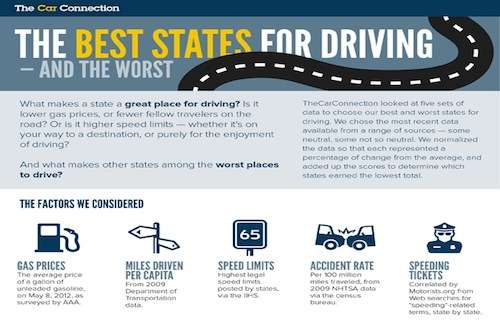 New study: Best and worst states to drive in

Where does your state rank on Car Connection's new list.
Advertisement

Although most drivers likely hate driving in their particular state, there are 10 particular states that are the best and worst to drive in, according to a new study by The Car Connection. In order to up with their best and worst list, The Car Connection decided to look at five particular categories: gas prices; miles driven per capita; speed limits, accident rates and speeding tickets. The automotive site then weighed the five criteria against the latest national averages in order to determine which states differed the greatest from the norm.

So what states ranked the highest on Car Connection’s list? Number one on the list was Alaska due to the low number of miles driven by travelers and speeding being a minimal concern. Next up was Utah, a reasonably safe state with high speed limits. Rounding out the top five were three New England states: Connecticut, Rhode Island and Massachusetts. Connecticut earned its spot due to its considerably low accident rate, while Rhode Island faired well due to its low ticketing rates and miles driven per capita. Massachusetts, on the other hand, was one of the safest states on the list, posting one of the lowest accident rates.

While primarily northern states dominated the top five, it was their southern counterparts that lead the bottom five. According to Car Connection, the worst state to drive in is Louisiana. The Pelican State topped the bottom five because of its extremely high crash rates. On the plus side, Louisiana’s gas prices are markedly lower than the national average. Next up was Florida, which suffered due to its high rate of accidents and diligent highway patrolmen, who enjoy writing tickets. Georgia also made the list due to high frequency of speeding tickets. Mississippi and Alabama finished out the five worst driving states as a result of their elevated accident rates.

The study was based on the average price of a gallon of unleaded gasoline, on May 8, 2012. Car Connection gathered their miles driver per capita data from 2009 Department of Transportation reports. Speed limit data was obtained via the Insurance Institute for Highway Safety website, while the accident rate comes from the National Highway Traffic Safety Administration. Lastly, Motorists.org was responsible for speeding ticket information.

If you wish to weigh in on the study or make a case for your own state, visit the Car Connection on Facebook or Twitter.

Aaron Turpen wrote on May 24, 2012 - 12:15am Permalink
I personally love driving in Wyoming. It probably didn't rank highly on their list because of the high number of miles driven on average here, but those miles are unobstructed, highway speed (65mph and 75mph) through some great scenery.

Tesla Giga Berlin's New Hurdle: It's Not Only the Gov't, but Now Tesla Itself
Teslas Are Sold Out Until 2023, But The Timing May Reverse
END_OF_DOCUMENT_TOKEN_TO_BE_REPLACED