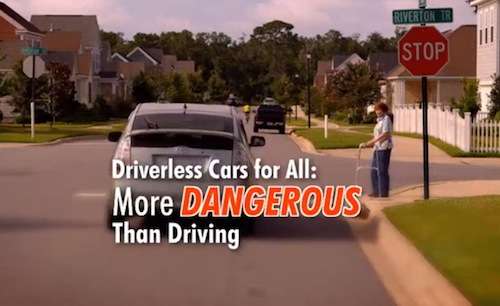 This new ad from the Committee to Protect Florida takes the idea of scare tactics to a whole new level.
Advertisement

Do you remember the over-the-top political ad that featured a man representing Rep. Paul Ryan (R-Wisconsin) throwing an elderly woman off a cliff? Well that spot, which took a not so subtle swipe at Ryan’s Medicare plan, may have met its match. A newly released ad, also targeted at seniors, aims to portray autonomous cars as four-wheeled killing machines.

The ad, which was created by the PAC (political action committee) the Committee to Protect Florida, criticizes Florida State Senate candidate Jeff Brandes (R) because he sponsored legislation to allow driverless cars in Florida. In order to drive the point home, the commercial features a voice over by an elderly woman who seems frightened of autonomous technology.

Furthermore, the ad depicts a menacing looking Toyota Prius prowling an innocent neighborhood nearly hitting a senior citizen trying to cross the street (with the help of her walker of course). Not surprisingly, the crazed driverless vehicle shows no regard for stop signs.

The voice over also states that autonomous vehicles are nothing more than “remote controlled cars,” which simply is not true. Obviously the commercial would not be as effective if it referenced the radar, lidar, GPS and computer vision technology that goes into driverless cars. Also not present in the ad is the driver that would be sitting in the front seat. Unfortunately, the ad may be so ridiculous that it may scare some seniors into voting against their best interest.

Think about it, what group of citizens would greatly benefit from driverless vehicles? Seniors who are unable to drive due to advanced age or a disability should rejoice in the possibility of having an invisible chauffeur.

Aside from attacking Brandes’ stance on autonomous driving, the ad also criticizes his sponsorship of the new Howard Frankland Bridge toll. While that particular critique may or may not be warranted, the ad’s portrayal of driverless cars is simply irresponsible.

Brandes, who is currently a member of Florida’s House of Representatives, is up against Rep. Jim Frishe (R) for the vacant Senate seat. Voters will decide Tampa’s Senate District 22 seat on Tuesday, Aug. 14.

The Committee to Protect Florida is a conservative PAC run by political consultant Rockie Pennington. According to the group’s website, its goal is as follows:

“The purpose of this Committee is to support and advance the ideals of protecting the interests of the state of Florida. The Committee is empowered to raise funds for the purpose of furthering these principles; to inform the public of the actions and activities of persons seeking public office of their adherence to these principles; to employ such persons as necessary to further the purposes of the Committee; and to do any and all things necessary or desirable for the attainment of these purposes.”

Check out the ad below:

Nehemiah Spencer wrote on August 13, 2012 - 11:57pm Permalink
shameful, misleading, and ridiculous. Google has logged over 300,000 miles accident free on public roads in its driverless cars. Except one fender bender incident -- but a human was driving the car at that time.
Aaron Turpen wrote on August 14, 2012 - 12:29pm Permalink
They should've used a Plymouth Fury and done a Christine spoof.