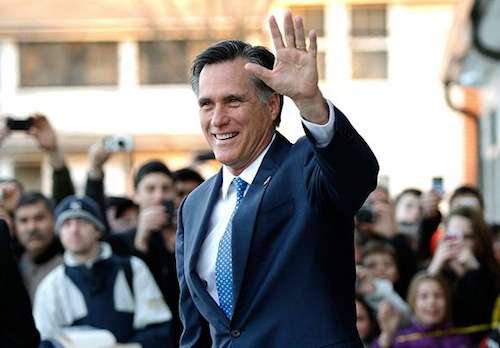 While many campaign followers go unnoticed, one Mitt Romney supporter has just received a new pickup truck for all of his hard work. The New York Times reports that Jim Wilson, a 70-year-old Romney enthusiast was given a 2003 Chevy Silverado one week after his 1998 GMC pickup truck caught fire. Over the past year, Wilson had logged in over 40,000 miles in his Romney-clad truck. Wilson, who hails from Virginia, has faithfully followed Romney to countless campaign stops across the country. In total, Wilson has visited 15 states and 150 campaign events, bringing his giant “Romney for President” sign to each location.

More of a campaign groupie than supporter, Wilson is an avid anti-Obama Republican and a former insurance salesman. Wilson has become known on the campaign trail for his warm nature and quit wit, which have added a humanizing component to the Romney campaign. Romney, who has been criticized for his failure to connect with voters, has benefited from Wilson’s off-color Viagra jokes and his propensity to hug every woman he meets, says the New York Times.

Luckily for Wilson, all of his hard work and dedication paid off when he received a new truck from the Romney campaign after his was engulfed in flames after his Romney sign caught on fire. The Romney people paid the full price of the car, which was $13,900. Wilson, however, was left to the vehicle’s registration fee and taxes. The fee did not faze an elated Wilson who said, “I feel guilty smoking in it. It’s so clean I felt I had to take my shoes off before getting in.”

The Romney people originally contacted Wilson when his hunt for a new truck began. Wilson received a call shortly after the demise of his truck, saying that the Romney campaign was willing to foot the bill for his new ride. As for why they agreed to help Wilson, Ryan William, a Romney spokesman, said the campaign “wanted to help him fulfill his commitment to return to the trail as soon as possible.”

Romney officially presented Wilson with his truck and a fire extinguisher on Thursday. “Look what I got for you, Wilson,” joked Romney. “Just in case!” Wilson then held the extinguisher above his head and exclaimed: “That’s the trophy! We’re safe at last.”

On Friday, the Romney campaign made its way to a fundraiser in New York. No word yet as to whether Wilson and his new truck followed suit.

LG's New EV Battery Plant Is a Welcome News for Tesla
Tesla Giga Berlin's New Hurdle: It's Not Only the Gov't, but Now Tesla Itself
END_OF_DOCUMENT_TOKEN_TO_BE_REPLACED