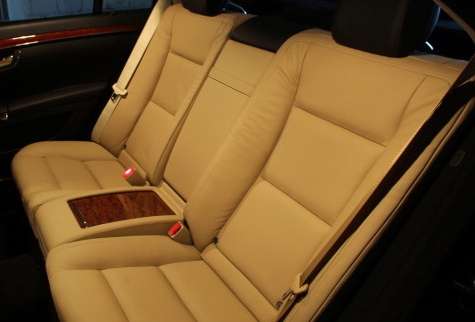 Mercedes-Benz has just debuted its new active seat belt buckle, which will go into production later this year in Germany. A notable innovation, the active seat belt works with the help of an electric motor that automatically extends and retracts the seat belt buckle. Belt buckles automatically emerge from the seat when the rear door is opened, thus simplifying the fastening of seat belts. Mercedes-Benz hopes that the new technology makes it easier for adults, children and the elderly alike to fasten their seat belts.

Aside from improving ease of use, active seat belts are also integrated with the PRE-SAFE preventative safety system. This Mercedes-Benz exclusive technology initiates when outside objects are detected that may cause an accident, which better prepares passengers for potential impact.

Furthermore, the active seat belt utilizes POST-SAFE, a technology that enables rescue workers and/or vehicle occupants to easily unbuckle seat belts in the event of an accident. When a crash is detected, POST-SAFE electronically extends the belt buckle helping to provide easier access.

In addition to several remarkable safety features, Mercedes-Benz active seat belts also employ practical features like an illuminated insertion slot. The illuminated slot helps draw the passenger's attention to the buckle, making it easier to see in the dark. Also, the new active technology automatically minimizes belt slack once the seat belt buckle is secured. Decreased belt slack assures that the passenger is properly secured in the seat, especially in the pelvis and thorax areas.

As can be surmised by the active seat belt’s description, Mercedes-Benz has covered all bases to guarantee ultimate passenger safety. Particularly, the technology aims to cover four areas: “Safe driving,” “In the event of danger,” “In an accident” and “After an accident” according to Mercedes-Benz.

“All the crucial biological features of humans – joints, muscles, tendons, ligaments, bones – can only be simulated in very rough terms with dummies,” stated Dr. Ipek. “Some seated positions, such as when a rear passenger is dozing and the belt does not pass over the pelvis in the correct manner, simply cannot be recreated with a dummy,” he continued.

No word yet on which model will be the first to come equipped with the new active seat belt technology, but stay tuned as Mercedes-Benz begins production later this year.