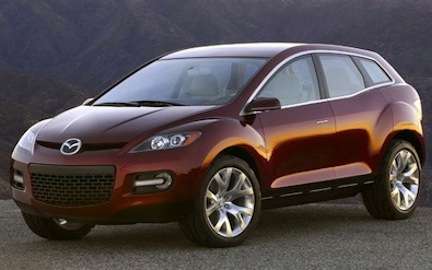 In attempt to make room for the all-new CX-5, Mazda has discontinued the CX-7 in U.S. markets.
Advertisement

Mazda has announced that it will be discontinuing the CX-7, a mid-size crossover SUV, to make way for the CX-5. According to Mazda, the discontinuance only affects North America. The CX-7 concept was first unveiled at the 2006 Los Angeles Auto Show, the same year in which Mazda began building production models. The CX-7 was made available to the public in spring 2006 as a 2007 model. Still available overseas, The CX-7 is Mazda’s first mid-size SUV since the Navajo (1991-1994).

Despite modest sales, Mazda product communications specialist Beverly Braga explained the news to Motor Trend stating: "CX-5 has a clearer competitive set, unlike CX-7, which was in the middle of two segments."

Rumors of the CX-7’s impending doom have been circulating quite a bit lately. The writing appeared to be on the wall, since the CX-7 had not been redesigned since 2010, the same year in which the CX-5’s concept debuted. Even in its revamp year, the CX-5 only received one major upgrade, a front-end redesign. Also contributing to the CX-7’s demise was its poor sales figures. Although the SUV sold 41,653 in 2007, these numbers were cut in half to 20,583 in 2009. Sales did climb last year to 35,641, but the news was mostly overshadowed with the CX-5 making its heralded debut at the Los Angeles Auto Show. Despite less than stellar CX-7 sales, Mazda is expecting “aggressive sales” of the 2013 CX-5.

Compared to its big brother’s 2.5-liter engine with 161-hp, the CX-5 features Mazda’s Skyactiv-G 2.0-liter engine, which produces 155-hp. Additionally, the CX-5 is two inches shorter in wheelbase and five inches shorter in length. Although smaller, The 2013 CX-5 actually boasts more interior space than its predecessor, with 103.8 cubic feet or interior volume compared to the CX-7’s 101.7. The CX-5 also gains an added seven cubic feet when its seats are folded. Most importantly, the CX-5 touts a much higher fuel economy of 26 city/32 highway vs. 20 city/28 highway for the CX-7.

Mazda has resorted to some unique marketing strategies with the CX-5 in order to reach its “aggressive sales” predictions. Last month, Mazda partnered with Universal Pictures to in a series of advertisements cross-promoting the CX-5 with the movie, Dr. Seuss’ The Lorax. The Lorax-based commercial is centered on Mazda’s new Skyactiv Technology. Unfortunately for Mazda, the marketing campaign has generated more negative attention than positive. An online petition was actually launched to end Mazda’s CX-5 commercials, claiming that the automaker was perverting the original message of Dr. Seuss’ book.