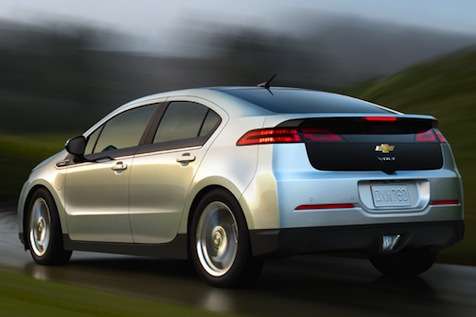 Chevy's latest marketing campaign is part of a long line of advertisements designed to educate consumers about the Volt.
Advertisement

There are an awful lot of misconceptions surrounding the Chevy Volt. In particular, both consumers and even some politicians have called the Volt’s fuel economy and safety into question. While some car companies may shy away from criticism, Chevy has decided to set the record straight by unveiling their new “Just the Facts” ad campaign for the 2012 Chevy Volt. In terms of safety facts, the ad mentions that the Volt is a 2012 IHHS Safety Pick and the recipient of a five star vehicle score from the National Highway Traffic Safety Administration. Additionally, Chevy mentions that the Volt’s battery was tested for 395,000 hours before being made available to the public.

The Volt’s safety prowess has been under the microscope ever since the NHTSA began a safety defect investigation after a side-impact collision caused a fire three weeks after the test. Despite the test, which took place last year, the NHTSA issued to following statement in January 2012: "Based on the available data, NHTSA does not believe that Chevy Volts or other electric vehicles pose a greater risk of fire than gasoline-powered vehicles."

Aside from questions about safety, the Volt ‘s fuel efficiency has also been a topic of concern. Just today, Chevy posted the following misconception on their Facebook page: “One owner recently told us someone thought his Volt could literally only travel 35 miles on only electricity. He had to explain that the Volt travels, on average, 35 miles on electricity before the gasoline generator takes it hundreds of miles further.”

Although future “Just the Facts” commercials will likely address the mpg debate, the automaker previously covered the issue in last September’s Chevy Volt “Gas Station” ad. The 30-second spot featured a Volt owner trying to explain to confused onlookers that the Volt can either be charged for shorter commutes or use gasoline if drivers wish to go farther. The ad explained, “It’s electric when you want it, gas when you need it.”

Just as the ad depicted confusion amongst the fictional gas station patrons, Chevy has been facing similar perplexity amongst real consumers. In order to curb this confusion, Chevy also has the 2-minute “How the Volt Works” video on their website, which explains the car’s fuel economy. The video says that the Volt on average gets an EPA estimated 35-mpg on a single charge. It takes 10 hrs to charge the Volt via a regular outlet and 4 hours with the use of a 240-volt home charging station. After this charge runs out, the Volt’s gasoline component kicks in, working with the electric motor to give the vehicle up to 375-mpg on a full tank of gas. Chevy even provides Volt drivers with mobile and computer applications to check their vehicle’s charge level.

Although Chevy has presented such facts from the beginning, the company’s latest ad campaign may give the vehicle the final push it needs with consumers. With that said, perhaps Chevy’s attempt to give the public some clarification is working, because the Volt sold 1,023 units in February 2012, more than double the previous month’s sales.