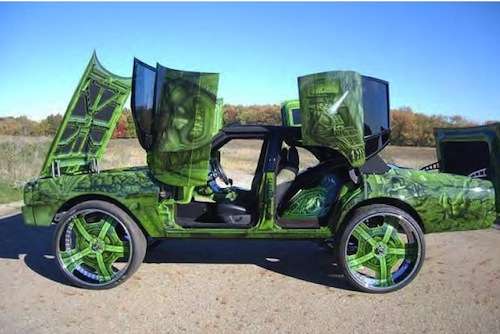 Are you in the market for a super hero-themed car? Well you’re in luck, because a repossessed ‘Incredible Hulk’ car is currently being auctioned off by the U.S. Marshals Service. There is one caveat, however: a notorious drug dealer once owned it.

Previously owned by Ohio drug dealer Thomas King, the vehicle is a modified 1989 Chevy Caprice, equipped with a Corvette L7S engine. The ‘Hulk’ car also touts 30” custom-painted wheels, custom A/V system with 12 amps and four 15” subwoofers, 4 TVs, and an iPad for controls. Not to mention, it also includes a hydraulic hood. The starting bid is $49,900.

The car was initially repossessed in March during a massive drug bust in Fairfield, Ohio. Aside from the ‘Hulk’ car, cops also seized four other luxury vehicles, a machine gun and 500 pounds of marijuana. The seized cars and drugs totaled approximately $1 million, according to Butler County Sheriff Richard Jones, who called it one of the largest cases he’d seen in a long time.

King has been charged with drug possession, but more charges are expected to come. King was caught due to a joint investigation between the Butler County Undercover Regional Narcotics Task Force and the United States Drug Enforcement Agency.

The U.S. Marshals Service auction continues until Monday, November 12, 2012. If you are interested in bidding on the vehicle you can call (800) 824-7881 or email [email protected] Eligible bidders must provide a copy of their driver’s license and contact information. The winning bidder must also pay a $500 deposit. The current U.S. Marshall auction also includes a 1969 Chevy Camaro, which boasts a starting price of $49,900.

Although King may not be a household name, a vehicle once owned by one of the most recognizable criminal’s ever was auctioned earlier this year. In July, an armored 1928 Cadillac V8 Town Sedan once owned by Al Capone fetched $341,000 at RM Auctions at St. John’s event in Plymouth, Michigan.

Capone’s former ride features a V8 engine, which delivers 90 bhp and a three-speed manual transmission. At one time, the vehicle contained 3,000 pounds of bulletproof asbestos-wrapped steel plating and one-inch thick glass. Although the Cadillac has lost its armament, it still possesses a secret rear window compartment, for rifle storage.

mikedudical wrote on November 10, 2012 - 9:22pm Permalink
You can buy this car right now on repofinder.org. I'll bet with all the notoriety it sells for a lot.
Aaron Turpen wrote on November 11, 2012 - 4:36pm Permalink
Umm... "reposession" implies that the person who took it was the original owner - as in a bank reposessing a car because someone didn't make payments. SEIZED vehicles are those taken by government (or whoever else has the bigger guns at the time) in order to profit from their taking (i.e. resell via auction). So this is not a repo, it's a seized vehicle. "Asset forfeiture" is a nice way of saying "we took your stuff because we're government." Oh, and King was CHARGED and hasn't been CONVICTED, which means they're selling his stuff without him first getting convicted of any crimes related to the vehicle. How nice of them. Gotta love forfeiture, the cop's version of legal thievery. Oh and all that money they get from these auctions goes to fund the police on more drug actions. Now, friends, you know the real reason harmless plants are illegal.
Anonymous wrote on November 14, 2012 - 12:58am Permalink
THAT IS SO TRU WHAT YOU ARE SAYING. I RESPECT WHAT YOU SAID. THAT IS CRAZY HE HADNT BEEN CONVICTED YET. THEN SELLING HIS CAR FOR THEMSELVES THEY SHOULD GIVE HIM THE MONEY MADE FOR AN ATTORNEY SINCE HE AINT CONVICTED.
Anonymous wrote on May 5, 2013 - 3:42am Permalink
I know how it feels to have my shit taken from the pigs. Greene county took my cars and even my flat screens off the walls. Filthy thieves they will use the law to be criminals themselves. I know and just to not do more time you have to plea out. The bad thing about it is they ultimately spend more money then they make when they bust someone for weed. They got me and my brother for 40,000 1 car a few flat screens and some guns. Now they are spending 30,000 a year for three years to keep my brother locked up. Plus they have to turn around and support his kids with government benefits since he cant sell weed to take care of them. LoL.That don't count for the money spent on the court and prosecutor. Them bitches investigated us for a year and a half for all that. Now I got them paying for my education with a pell grant f***k em. WORK THE SYSTEM. BEFORE IT FALLS BECAUSE ITS ALL SCREWED UP. OH YEAH GREENE COUNTY TASK FORCE F. U.