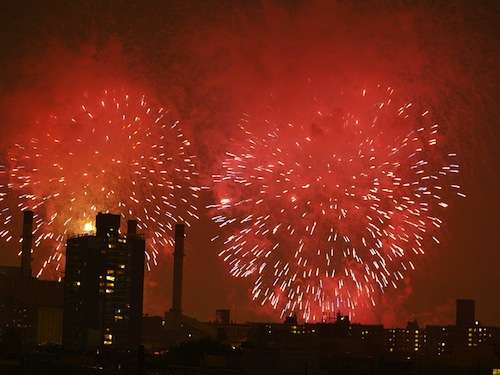 Though it may be the deadliest day for teen drivers, Allstate has some tips for teens and their parents to end the trend.
Advertisement

While the Fourth of July is often associated with summertime fun activities like picnics, barbecues, parades and fireworks, it also has another dubious distinction. A new Institute for Highway Safety (IIHS) study shows that Independence Day is the deadliest day for teens on the road and also just as deadly for the motorists sharing the road with them. In fact, over 800 deaths have occurred on July 4 from 2006-2010.

If current projections hold true, 140 motorists will be killed this 4th of July. Of this expected number, teens are especially susceptible, according to recent research from The Allstate Foundation. The new study concluded that teens are mainly vulnerable to fatal distracted driving incidents. Nearly half of all teens studied report that texting is their greatest distraction while driving.

"These tragedies are compounded by the fact that many crashes are preventable," said Tracie Bibb, a St. Louis-based agent. "Driver error, speeding and distractions are the main causes of crashes, and seemingly simple activities such as switching radio stations or interacting with friends can significantly impair a teen's or adult's ability to react quickly to changing traffic conditions.”

That said, Congress is currently considering legislation that urges states to enact teen driving laws, or Graduated Driver Licensing. Research demonstrates that GDL policies have dramatically reduced traffic fatalities by as much as 40 percent in states where it has been instituted. Nationwide GDL implementation could save 2,000 lives and $13.6 billion per year, according to The Allstate Foundation.

In the meantime, parents of teen drivers can take several steps in order to protect their teens during this year’s Fourth of July celebrations. Parents should remind their teens to put down their cell phones and put on their seat belts, says Allstate. Although it might not be the cool thing to do, teens may also benefit from letting their parents do the driving this year, if he or she just recently received their driver’s license. Allstate also encourages parents to point out the appropriate speed limits on the roads their teen is apt to drive. Lastly, parents should practice what they preach and set a suitable example for their teen while driving.