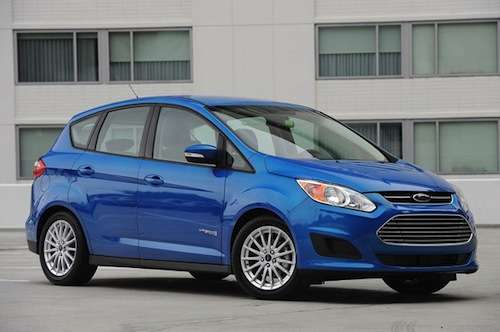 Although the Ford C-MAX is the new kid on the block in terms of hybrids, it is aiming to become top dog. In order to dethrone Toyota, in particular the Prius v, Ford has launched a new ad campaign which showcases the advantages that the C-MAX hybrid posses over it main competitor.

Titled “Hybrid Games,” the new multi-media ad blitz showcases the C-MAX and Prius v in a number of different contests including the “The Semi Pass” and “MPG Challenge.” According to Ford’s website, the new marketing campaign is about establishing that not all hybrids are created equal.

“Sure, hybrids help conserve fuel and reduce emissions. But when it comes to the daily need for performance, comfort, room and convenience, how do they stack up? The Hybrid Games turn routine driving into a thrilling spectacle of competition,” reads the site.

So how does the C-MAX stack up against the perennial favorite Prius v? According to “The Semi Pass” test, the C-Max Hybrid is able to easily pass a semi truck due to its superior horsepower. The video features an amusing announcing team narrating the challenge as if it were an Olympic event.

Unfortunately for the Prius v, its inferior horsepower (134 hp) cause it to take longer to pass the semi truck. “What’s your rush dude, let’s just enjoy this,” says the X-Games-esque announcer to his uptight partner. Next up is the C-MAX hybrid, which demolishes the competition with its 188 horsepower and 129 ft.–lbs of torque.

In addition to possessing 40 percent more horsepower and 20 percent more torque, the C-MAX also touts a better fuel economy than the Prius v. The “MPG Challenge” shows the two vehicles facing off in dreaded L.A. traffic. The amusing challenge displays the C-MAX and Prius v performing a series of mundane errands like going to the bank and checking out a garage sale. The challenge ends when the Prius owner is forced to stop for gas. In the end, the C-MAX wins out with 47 mpg combined and a total range of 571 miles versus the Prius v’s 42 mpg combined.

Aside from superior fuel economy and horsepower, the C-MAX also boasts a cheaper price than the Prius v. The base price for the C-MAX is $25,995, which is $1,300 lower than the Prius v. Ford sold 969 C-Max hybrids in September, in its first month of availability. Toyota sold 3,088 Prius v hybrids. Stay tuned to see if the C-MAX's sales improve as its "Hybrid Games" marketing campaign unfolds over the next 15 months.

Check out the "MPG Challenge" clip below and CLICK HERE to check out all the “Hybrid Games” videos for yourself, as well as several other C-MAX clips.

Roger wrote on October 4, 2012 - 10:53pm Permalink
"So how does the C-MAX stack up against the perennial favorite Prius v?" How can the Prius V be a "perennial" favorite, it is only approaching the one year mark? Toyota will be introducing the next generation of its hybrid power-train but Ford did beat them here. The Prius V however, has to be given the trophy for being a bigger cargo hauler... and with a 4 inch longer wheelbase, a more comfy ride. I have average warm months mileage of 48mpg on my V, 43mpg in cold months, 46.7 overall. Several tanks have been 50+ mpg. Admittedly I drive mostly city mileage. I run mostly in ECO mode, does the EPA test mpg without using the ECO throttle position switch? Ford has done a good job with the C-Max (other than the name, sounds like a lift-truck :--) ),the CMax wasn't around when I bought the V, oh well then I was less confused!
AnonymousBOB wrote on October 5, 2012 - 9:07am Permalink
I also have a prius v i get 53mpg to 56mpg city driving every week for past year.excellent vehicle. So the cmax or any other vehicle will have to show me more mpg then i get now in same size vehicle for me to change my vehicle.
Roger wrote on October 5, 2012 - 2:01pm Permalink
For.... The Record.... the mpg findings stated in my post are all tank-to-tank actual figures, The in-car meter reads on the high side. However I am glad to hear of your good experience with the vehicle. I find, similar to a pure gas car, this hybrid gets better mpg when at operating temperature. Very short trips will not deliver the best mpg for me.