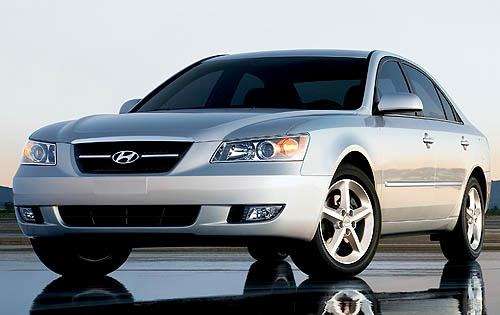 The National Highway Traffic Safety Administration announced on Friday it is launching an investigation into Hyundai Sonata sedans due to a corrosion problem, which may affect vehicle suspension.
Advertisement

Affected by today's investigation are about 393,000 model year 2006 through 2008 Hyundai Sonata vehicles that may suffer from rear subframe rust, which could lead to rear suspension control arm failure, according to the National Highway Traffic Safety Administration.

The NHTSA has received six complaints so far regarding the rust problems. Three owners complained of control arm failure at highway speeds, while two claimed that the failure occurred during activation of the electronic stability control arm. One owner reported that his dealer found extensive rust, which would cost anywhere from $1,350 to $2,450 to repair. Unfortunately, Hyundai was only willing to cover $500, according to the owner. No accidents or injuries have been reported, according to Hyundai.

Failing rear control arms may exhibit various warning signs that owners should be aware of. Most owners will typically notice a difference in alignment and vehicle handling. A worn control arm may affect the camber angle of the tire. As a result the tire may not hit the road flatly and will begin to show signs of wear. Aside from causing tire wear; compromised rear control arms will affect vehicle steering. Not only will the vehicle pull slightly or aggressively to either side, it will also make steering difficult in general.

Hyundai experienced similar corrosion problems in 2009, which led to four recalls of roughly 608,000 vehicles. The four recalls were as follows:

If the NHTSA investigation reveals that the corrosion problem poses a serious safety threat it could lead to a recall of certain 2006 through 2008 Sonatas. Hyundai has issued one recall so far in 2013, which concerned 6,100 model year 2012 Veloster vehicles. According to the recall notice, affected Veloster models may be equipped with a faulty panoramic sunroof that was weakened during the assembly process. As a result, the panoramic glass may unexpectedly shatter while the vehicle is in motion.

John C Dedert wrote on May 20, 2021 - 11:52pm Permalink
Also affects 2005 Sonatas, although not included in any recall. Mine's looking pretty grim. I may retire the car to a scrapyard, even though it's in otherwise good condition.

LG's New EV Battery Plant Is a Welcome News for Tesla
Tesla Giga Berlin's New Hurdle: It's Not Only the Gov't, but Now Tesla Itself
END_OF_DOCUMENT_TOKEN_TO_BE_REPLACED