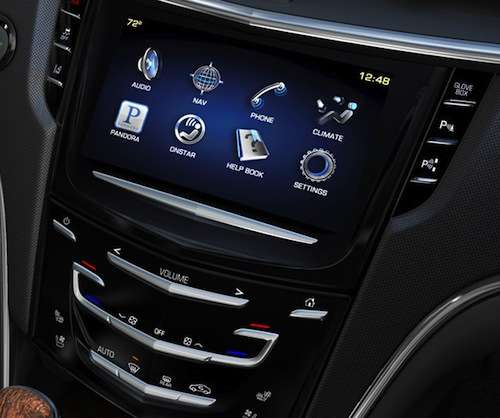 Cadillac's new CUE infotainment system has received a less than stellar review from Consumer Reports, but it as damning as the site's critique of the MyFord Touch system?
Advertisement

Consumer Reports appreciates various aspects of the new Cadillac XTS – except for the vehicle’s infotainment system. Although the luxurious vehicle earned praise for its well-appointed cabin and spacious interior, the consumer watchdog site argues that the all-new XTS is stymied by its new high-tech infotainment system called CUE, which stands for Cadillac User Experience. According to Consumer Reports, CUE is “convoluted and frustrating” to the point where it takes away from an otherwise successful vehicle.

So what makes Cadillac’s infotainment system so inept? Well, Consumer Reports argues that the customizable touch screen is difficult to navigate. Most frustrating is that CUE contains numerous “hidden icons,” which are only revealed when the user’s hand comes in close proximity to the touch screen. This frustrating feature creates a “moving target” dilemma, says Consumer Reports.

Once users are finally able to find the feature they want, it is difficult to select, argues the consumer website. As the name implies, a touch screen system is supposed to register the light touch of a user, but CUE often requires a hard tap.

Aside from an unresponsive touch screen, CUE’s “haptic” feedback feature is also less than stellar. Although the haptic technology is designed to send small vibrations through the screen to the driver’s fingertip, it is slow to respond.

Consumer Reports also takes issue with CUE’s lack of knobs. The site contends that a volume knob or station dial would have come in handy since accessing such controls requires users to avert their eyes from the road. CUE also contains deceiving raised “metal” sections that appear as if they can be pushed, but cannot.

On the bright side, Consumer Reports commends CUE for its impressive appearance, including chrome accents. Furthermore, smart-phone connectivity and voice-command features work quite well.

CUE is currently available in the Cadillac XTS, ATS and SRX.