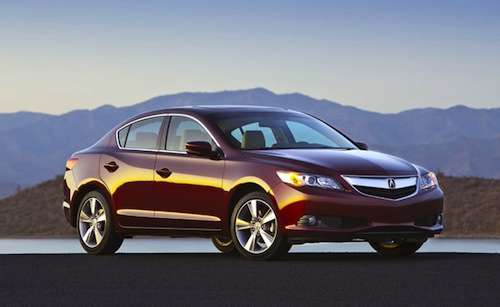 Consumer Reports calls the 2013 Acura ILX a 'tarted up Civic'

While it may be slightly more refined than the Honda Civic, Consumer Reports argues that the all-new Acura ILX is not a true luxury car.
Advertisement

Although the 2013 Acura ILX has been touted as an entry-level luxury sedan with Aero-fused Dynamics and Amplitude Reactive technology, Consumer Reports claims that it is nothing more than a “tarted up Civic.” The consumer watchdog site does concede that the ILX improves upon many of the 2012 Honda Civic’s shortcomings, but not enough to justify its base price. “Our test car stickered for just over $30,000 – a lot of coin for a Civic by any name,” says Consumer Reports.

While it does improve upon the Civic’s noisy, the Acura ILX possesses some limitations of its own. The ILX luxury sedan may ride better than the Civic, but it does not improve upon its less expensive sibling’s choppy and unrefined ride. This is due to the vehicle’s Amplitude Reactive dampers, which make for an “unsettled highway ride,” according to Consumer Reports.

As for the ILX’s engine, Consumer Reports defines it as “pokey,” yet efficient. In fact, the Acura ILX boasts a 29-mpg combined rating with its gasoline model. Although Consumer Reports tested the gasoline version, the automaker also offers a hybrid version, which gets an estimated 39-mpg city and 38-mpg highway.

Another area in which the Acura ILX does not greatly improve upon the Honda Civic is its interior. Despite offering three interior packages, Consumer Reports maintains that the ILX’s interior still “falls short of luxury.”

In the end, while “not a bad car,” the Acura ILX is still a “Civic in a tuxedo,” according to the consumer site. Since the ILX doesn’t quite measure up to Consumer Reports’ notion of luxury, the site suggests several other substitutes that consumers may want to consider.

Rather than opting for an entry-level luxury vehicle like the ILX, prospective buyers could by a loaded family sedan like the Toyota Camry or Hyundai Sonata, says Consumer Reports. Not only do these two vehicles offer more room, they also offer superior fuel economy. If you are in the market for a luxury sedan, Consumer Reports suggests purchasing the Acura TSX, which the site rated higher than the ILX.

On a more positive note, the 2013 Acura ILX recently received a Top Safety Pick rating from the Insurance Institute for Highway Safety (IIHS). The ILX was honored alongside fellow Acura models such as the 2013 RDX and 2012 TL, MDX, and TSX. Acura has credited its safety success to its advanced compatibility engineering (ACE) body structure, which increases occupant protection and crash compatibility.