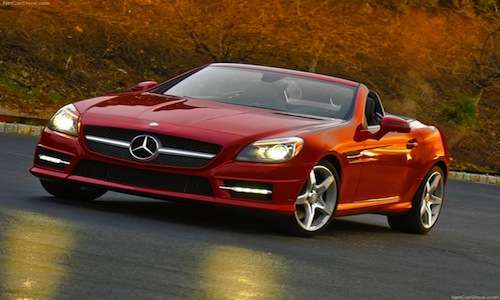 Clients that sign up for a new five-year $1 million CD will have their choice of four different 2012 Mercedes-Benz models.
Advertisement

Are you tired of getting cheap gifts for signing up for a new bank account? Perhaps you’ve received some free pens or if you're lucky, a gift card. Well toss out all those inexpensive trinkets, because Florida's C1 Bank is offering a free Mercedes-Benz when local residents sign up for a new bank account. The Tampa Bay Buccaneers, Pewter Partners and Crown Eurocars, a Mercedes-Benz dealer, have all teamed with C1 Bank to present this unique promotion. The announcement coincides with the name change of Community Bank to C1, which occurred today.

So who exactly qualifies for the free 2012 Mercedes-Benz? It appears that the only people that qualify for the promotion are already financially endowed enough to purchase a Benz. In order to receive a new car, clients must enroll in a new five-year $1,000,000 CD account at C1. Customers that sign up for such an account will have their choice of the 2012 SLK350 Roadster, 2012 E350 Sedan, 2012 ML350 SUV, and 2012 E350 Convertible. As an added bonus, new cars will come with tags, title, licenses and taxes all paid.

That said, clients will not earn the general APY, which is associated with C1’s five-year CD. "C1 Bank is offering its clients the ability to drive off in their own brand new Mercedes-Benz just for moving their money to C1 Bank. In this interest rate environment where the five year CD has an APY of 1.20% it is thrilling to change the game with the instant gratification of a spectacular Mercedes-Benz that our client will own including tax, title, and license,” said C1 Bank CEO Trevor Burgess.

Larry Casto, General Manager of Crown Eurocars also spoke of the offer stating, "Crown Eurocars is extremely excited about this innovative program and are pleased to join C1 Bank in this effort. In doing so, we look forward to this partnership further enhancing both our commitments to serving the Tampa Bay community.”

Aside from forfeiting APY, there are several other details in the fine print. First, there is a limit of two vehicles per household. Secondly, when you cash out you will receive exactly what you put in. Clients will essentially get a $60,000 car and the initial $1 million they contributed. Individuals that wish to remove their funds early will be charged a withdrawal fee of $3,000 and will be docked the entire price of the Mercedes-Benz vehicle.