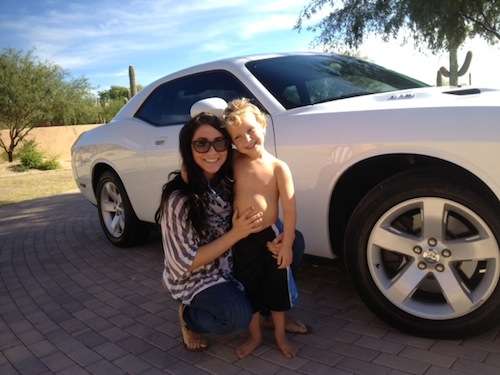 Are you in the market for a gently used American muscle car? Well, Dancing With the Stars alum Bristol Palin is selling her 2010 Dodge Charger R/T HEMI on Craigslist. According to Palin, the vehicle is in perfect condition, contains custom black and white leather seats, tinted windows, and has just 14,510 miles. In order to prove it’s her car, Palin even included a picture of herself and three-year-old son Tripp with the car.

The reality star also included the Craigslist link on her blog with the title: “Who Wants to Buy My Car?” As for why she chose the popular classified site, Palin wrote, “Faithful readers know I love Craigslist!! So, when it came time to sell my car, that’s exactly where I went!”

Palin lists the vehicle’s price as $27,500 or best offer, but is that a fair price? Based on the gas mileage, seller’s location, condition and optional leather seating, the private party value of Palin’s car would be $25,967, according to KBB.com.

Palin made her first appearance on Dancing With the Stars in 2010, when she reached the finals, finishing in third place. Palin also appeared on the ABC reality show earlier this fall as part of an all-star cast special. She was eliminated in the show’s fourth week due to low combined judges’ and viewer votes.

Aside from Dancing With the Stars, Palin also starred in the short-lived Lifetime reality show Bristol Palin: Life’s A Tripp. The 14-episode series followed Palin’s relocation to Alaska, after living in California.

Despite the show’s low ratings, it did attract some attention due to a defamation lawsuit that was waged against Palin and A&E, which owns Lifetime. In September 2011, Stephen Hanks heckled Palin while in an L.A. bar, which was subsequently featured in an episode of the show. Hanks then filed a lawsuit claiming that he never consented to the footage being shown. Unfortunately for Hanks, his suit was thrown out of court on Saturday.

In addition to her reality show stardom, Palin is also a best-selling author. Released in 2011, Palin’s memoir Not Afraid of Life: My Journey So Far was featured on numerous New York Times bestseller lists. Despite being a bestseller, the book received mixed reviews, particularly due to the fact that Palin chose to write her memoir at the age of 20.