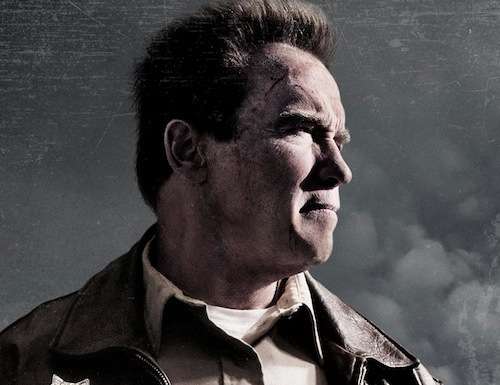 Late last week, Arnold Schwarzenegger invited journalists to an L.A. ranch to discuss his new movie 'The Last Stand' and to crush cars in his M47 Patton tank.
Advertisement

While some movie stars may appear on a late night talk show to support their latest project, action star Arnold Schwarzenegger is taking a different route to promote his new movie The Last Stand. Last Friday, the former California governor showed off his 50-ton M47 Patton tank and held an impromptu car-crushing exhibit. In typical Schwarzenegger fashion, the actor did it all while smoking a cigar and donning his trademark aviator sunglasses. Click HERE to see pictures of the demonstration and HERE for a video.

The Terminator star originally purchased the massive military tank in 1992. Interestingly, it is the same tank that Schwarzenegger drove as an 18-year-old youth in the Austrian Army.

Aside from crushing cars, Schwarzenegger also shared several tank-related stories. According to Schwarzenegger, he and his fellow soldiers would use the metal over the tank’s engine as a “hot spot” as a cooking stove to grill steaks and fry eggs. The actor also told reporters that soldiers used to dig holes beneath the tank every night to sleep and to avoid “the wild boars roaming the countryside.”

Named after famed United States Army General George S. Patton, the M47 Patton is a medium tank that was used by U.S. Cold War allies, both SEATO and NATO, but never saw combat while in US service. It was produced from 1951 to 1953. Schwarzenegger’s model is currently stored at Melody Ranch Picture Studio near Los Angeles.

No stranger to military-style vehicles, Schwarzenegger recently bought a gigantic Mercedes-Benz Unimog U1300 multipurpose monster truck for $250,000. Since the vehicle is specifically designed for construction, fire and rescue, haulage and agricultural jobs, Schwarzenegger had to customize his Unimog before it was street legal. The German company Mertec modified the actor’s ride to get it ready to handle the L.A. terrain, specifically the roads of Santa Monica.

An avid collector of military vehicles, Schwarzenegger was owned a total of 8 Hummers. The action star unloaded the majority of these vehicles in 2006 in an effort to fulfill his promise as governor to reduce greenhouse emissions in California. Schwarzenegger did keep one Hummer, however, an environmentally friendly hybrid version.

Schwarzenegger first became interested in Humvees while in Oregon filming the 1990 comedy Kindergarten Cop. The actor reportedly became hooked after he witnessed a fleet of Army Humvees driving along the highway. Sadly for Schwarzenegger, civilian issue Humvees did not exist in 1990. Consequently, the actor commissioned that a civil model be manufactured, which it was two years later. Not surprisingly, Schwarzenegger attended the Commercial Hummer launch at the AM General building in 1992, where he received the keys to the first Hummer H1 produced.

Check out The Last Stand when it hits theaters on January 18.

Elon Makes a Cybertruck Statement With an Action, But Quiet in Words
Tesla's Record Month in China: Doubled Registrations in March 2021
END_OF_DOCUMENT_TOKEN_TO_BE_REPLACED