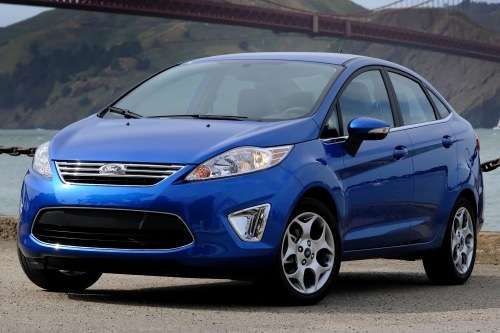 Although the creators behind the hit PBS show Downton Abbey have not responded to Irons' statement, Ford released both written and video responses directed at the actor. Keep reading to check out both.
Advertisement

Oscar winning actor Jeremy Irons may be one of the most critically acclaimed stars around today, but he may not have a fan in the Ford Motor Co. Irons embroiled himself in a bit of controversy this week when he disparagingly compared the hit PBS show Downton Abbey to the Ford Fiesta.

Irons made the comparison while attending a Television Critics Association discussion of his new show Shakespeare Uncovered, a series that combines history, biography, performances and new analysis to tell the story behind Shakespeare’s greatest plays. The actor began his discussion by taking a dig at the widely popular Downton Abbey, only to end his criticism with a less than kind mention of the Ford Fiesta.

“What I’m really excited about with ‘Shakespeare Uncovered’ is we’ll see some of the best British actors playing Shakespeare,” said Irons. “What you can do is open to this huge American audience…show them that actually television doesn’t end with ‘Downton Abbey.’ If you think that’s good, then watch Shakespeare productions. You’ll see what real writing, what real stories, what real characters are about.”

Irons went on to compare each show to a car stating: “A Ford Fiesta will get you there and give you a good time. But an Aston Martin, that’s what you’ve got with Shakespeare.” The crowd responded with immense laughter to Irons’ assessment.

“Jeremy Irons is a great actor. Everyone knows that. But our Fiesta is a great car. Given the situation we thought it would be best to issue a formal response with something Mr. Irons could appreciate: a ridiculously dressed, Shakespeare-spouting Bard on Ford.”

The video even takes a swipe at Irons’ starring role in the 2000 film Dungeons & Dragons. “I don’t remember Shakespeare writing any sonnets about dragon eggs or a role playing game for nerds,” says the video’s comically dressed bard. Click here to watch the automaker’s amusing video response to Irons.

“I’m a terrible television snob. I don’t watch very much television. I’ve never seen Downton Abbey. So I don’t know what I’m talking about, basically, when it comes to that. I’m sure it’s splendid.”

Even in jest, Irons statements will surely displease Downton Abbey’s devote fan base. Stay tuned to see the show’s fans and Fiesta drivers respond to Irons or if this controversy is just "Much Ado About Nothing."