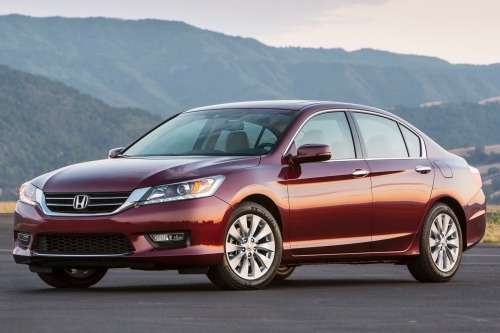 Honda is recalling certain 2013 Honda Accord vehicles due to a fuel tank issue, which may lead to fires.
Advertisement

Honda’s latest recall concerns 1,659 model year 2013 Honda Accord Low-Emission Vehicle (LEV) II rated vehicles built between Jan. 15, 2013 and April 5, 2013. The vehicles may be equipped with an improperly installed fuel tank neck, which may cause the fuel pump to not correctly seal to the fuel tank. As a result, the inadequate seal may leak fuel and cause a fire, according to the National Highway Traffic Safety Administration.

According to Honda, there are several symptoms for owners to consider in regard to the recall. Firstly, the vehicle’s check engine light may become illuminated if the integrity of the fuel tank seal is compromised. Secondly, owners should look for fuel smells being present, especially when refueling the vehicle.

Honda first became aware of the 2013 Honda Accord fuel tank problem in April after it received its first warranty claim. To date, Honda has received 116 warranty claims pertaining to the recall. There have been no fires, according to automaker.

Honda will begin notifying Accord customers of the recall on Aug. 1, 2013. Authorized Honda dealers will replace the fuel tank, nut, and O-ring gasket at no cost to the owner. Honda’s recall number is JA9. In the meantime, drivers may contact Honda at 1-310-783-2000 or visit www.recalls.honda.com. Honda expects to conclude the recall on Aug. 8, 2013.

Honda will not reimburse owners that repaired their vehicles prior to being issued the recall notice. Despite Honda’s policy, other automakers — such as Chrysler — do compensate owners if they incur any out of pocket expenses in relation to a recall.

The news marks the second time Honda has issued a fire-related recall recently. In fact, it comes less than one month after the automaker re-recalled 686,298 model year 2007 and 2008 Honda Fit hatchbacks, including about 143,000 in the United States.

What is a re-recall one might ask? Well, Honda previously recalled the aforementioned vehicles in 2010 over a master electrical switch issue that posed a fire risk. Unfortunately, Honda was unable to initially fix the problem, which is why it had to recall the Honda Fit again. Unlike today's recall, there have been numerous fires in relation to the Fit recall — including one that caused a fatality.