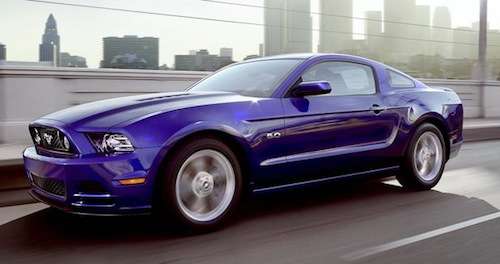 The new competition allows four lucky individuals to own a unique Mustang that they created.
Advertisement

Sure, you’ve probably always wanted to design your very own Ford Mustang, but did you actually think you could win you’re very own customized version for free. Well, now thanks to Ford’s new 2013 Ford Mustang Customizer this fantasy has become a reality. Ford’s interactive contest, which coincides with the launch of Mustang’s new customizer site, allows participants to personalize a 2013 Mustang to their own specifications. In the end, four modified Mustangs will be selected as contest winners. The lucky designers will receive their creation, free of charge. Ford will announce one winner per month until the contest ends in October.

So here’s how the competition works. First, individuals must build a Mustang within an allotted amount of points. Participants earn points by choosing the appropriate accessories for their Mustang. Contestant have the option of choosing one of four available models: V6; GT; BOSS and Shelby GT500. Next, you will be able to modify the vehicle based on 23 categories including color, body kit, deck lid, grille and hood. Certain parts and accessories will earn extra points, while others will not.

Additional points can be received by promoting your custom car on social media channels. Varying amounts of points can be amassed through Twitter, Facebook, Google + and obtaining “likes” on your design. You can even go head-to-head with other vehicles in order to accrue more points. Conversely, if you lose a battle, your points will decreases.

Each 1,000 points earned will result into one entry into that particular month’s Mustang drawing. You can design as many Mustangs as you want, as there is no rule prohibiting it. One unique Mustang will be chosen each month and the creator will receive that very vehicle exactly how it was configured. In rare cases, Ford may even consider manufacturing a special edition Mustang, if the design is exceptional.

Those interested can check out the 2013 Ford Mustang Customizer website. The first contest round begins on June 18 and ends on July 15. Subsequent contests will run each month, ending on October 7, 2012.

In case any of this sounds familiar, you may remember that Ford first launched the 2012 Ford Mustang Customizer website in September 2011. As is true with current customizer, the previous application allowed users to design and share their conception. The main difference of course, is that last year’s participants could not actually own and operate their design.

Toyota's First EV Will Have a Name of BZ: Toyota BZ
First Videos From Inside The Boring Company's Las Vegas Loop
END_OF_DOCUMENT_TOKEN_TO_BE_REPLACED