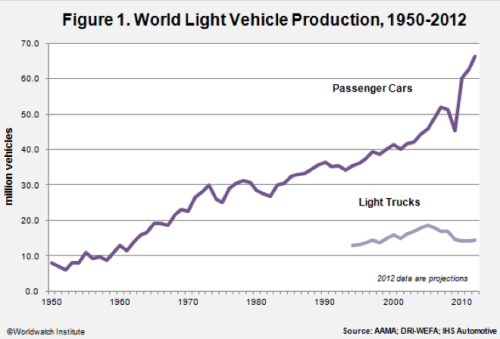 The Worldwatch Institute predicts that automotive production will top 80 million units this year, continuing a steady rise of annual production for the past several years.
Advertisement

New research for WI's Vital Signs Online service predicts that while hybrid vehicle production numbers will remain below 2% of the whole, overall production of light duty vehicles (cars, light trucks) could go as high as 81.8 million this year. If current production remains on track, says Worldwatch Senior Researcher Michale Renner in the report, then nearing 82 million is almost assured.

The main driver of production is emerging economies where purchasing power is allowing more and more people the means to buy cars. China is a significant factor in this trend.

Given that manufacturing capacities are still underutilized for most automakers around the globe, there is nothing but economics holding back auto production and sales. PriceWaterhouseCoopers estimates current production capacity to be at 95 million and with current growth, it could easily reach 100 million by 2016, notes Worldwatch.

Total vehicles on the road (including heavy-duty) was 30 million higher (979 million total) in 2011 over 2010 numbers. By the end of this year, it's possible that 1 billion vehicles (1 for every 7 people in the world) will be out there on the road.

The Chinese are increasingly taking to the roads, with driving distances rising from 262 billion kilometers driven in 1990 to 1.351 trillion in 2009, slightly more than a fivefold expansion. Growth in emerging economies has become near-exponential with a doubling of car miles traveled from 1975 to 2000 and then another doubling in just the decade after that (2000-2010). This trend is expected to continue with another doubling likely by 2016.

Tesla Contemplates A New Strategy for China Retail even As Sales Boom
Jay Leno on Elon Musk & EVs: “I Think He Should Get ... Credit"
END_OF_DOCUMENT_TOKEN_TO_BE_REPLACED