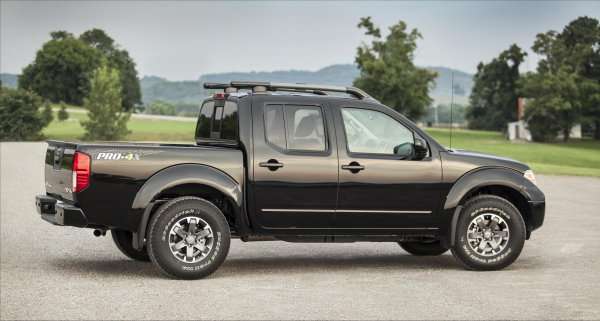 Edmunds.com has named its fuel efficient trucks list and both the 2014 Titan and 2014 Frontier are on it. Learn why this doesn't actually mean much.
Advertisement

Edmunds.com has released its Top 9 Most Fuel-Efficient Trucks for 2014 list and both the 2014 Nissan Titan and 2014 Nissan Frontier are on it. The Frontier tied for second place while the Titan just barely made the list at number nine. The list includes all gasoline-powered pickup trucks available on the U.S. market.

The Titan has an EPA rating of 15 mpg combined while the Frontier has a 21 mpg combined rating. Both are great trucks. But making this list is not really all that impressive. Why?

Because it's a list of nine pickups. Most of us would have hard-pressed to even name nine pickup trucks currently being offered on the U.S. market for the 2014 model year. Our market has five major truck makers in the light-duty realm: General Motors, Ford, Nissan, Ram and Toyota. In half-ton trucks, GM makes two models (GMC and Chevrolet branded), Ford makes one, Nissan makes one, Ram one and Toyota makes one. In midsize trucks, only Nissan and Toyota make a model on the consumer market and GM offers only one commercially. Add that up and that's just nine trucks total. Add in sport utilities and vans based on truck platforms and you'll get a few more, but those rarely have an efficiency rating above their pickup truck counterpart (due to weight).

In the end, however, we have to think about the first paragraph above. As great as many of the pickups on the market are, 15 mpg was enough to get on the top nine list of "most fuel-efficient trucks." It's especially telling given that of the list of nine trucks, many of them were V6 models, including the Frontier, Tacoma, F-150 EcoBoost, etc.

On the other hand, some good news for the Titan: it made the list despite the high-compression, cylinder de-activation, stop-start, and other technologies that other truck maker's are employing to improve their mileage - the Titan has none of these things, yet still made the list. With a redesign coming very soon (Nissan has not yet said when), that means the Titan could quickly climb this list on the next go-round.

Of course, next year, we'll see some new additions like the Chevrolet Colorado, Ford's new aluminum-bodied F-150, and so forth. But if the Titan manages to remain on the list in 2015 or get back on it in 2016 (depending on when Nissan brings us a new Titan), it will be because Nissan stepped up and made the changes necessary to stay competitive in MPG. Changes we see no reason for them not to be making, given the high efficiency of the rest of their vehicles and the government mandates that will affect the truck segment more than any other in the near future.

Times, they are a changin' in the pickup truck realm.

TD wrote on March 31, 2014 - 9:30am Permalink
Not a Ram truck fan in general, but this article lost some credibility when you failed to mention Ram as one of the main trucks in the market - however, you did mention Nissan. Even being a Nissan fan, I realize that Ram full size trucks are much more of a player in the market than the Titan (only scheduled to sell ~15K trucks this year).