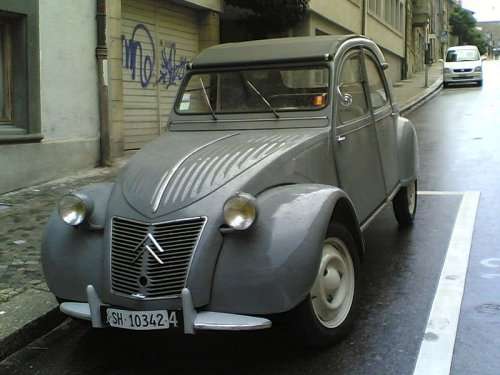 Automotive design takes many forms and is a fickle business, with last year's great thing quickly becoming this years butt of the joke. One example from 64 years ago highlights how a simple focus on one goal can be trendsetting and result in one of the most long-lived and highest-production vehicles of all time.
Advertisement

In 1948, at the Paris Salon show, the automotive world was thrown on its ear as what was to become one of the world's most iconic, best-selling, and longest-running production cars was debuted. At the time, of course, no one knew any of this and just saw a really odd, aesthetically questionable car being unveiled at a car show by a company that had just gone through the financial equivalent of the death and rebirth of today's Detroit giants after the bailouts.

That car was a design aimed at one very specific goal and it made that goal so well that it brought innovations that changed automotive for decades to come. It's goal was not to be pretty, nor to be fast, nor powerful, or even luxurious. Those are common goals for auto design and common goals rarely produce uncommon results. Instead, the singular goal that the newly-hatched Citroën had for its new design was this: get French farmers to finally give up their horse and buggies and buy a car instead.

Laughable? Maybe today it seems so, but in post-war France, there were still more horses and carts than cars and trucks on the roads. It was the equivalent of getting Americans today to give up gasoline cars in favor of more efficient, but higher-cost diesel alternatives. Culturally and economically, it was a hard sell. Turns out, the only mistake that Citroën made was in assuming that horse-and-buggy farmers were their target market. Their real market was the whole of Europe, because by the time it ended production in 1990, the 2CV had become the best-selling car with the longest production run ever to be seen.

The 2CV had a total production of just about 4 million cars (including its 1.24 million Fourgonnettes delivery an offshoot) and spawned spinoffs that were mechanically the same vehicle that had another 3.6 million units between them. Over 8.7 million total 2CV's were made with many still on the road today, especially in its home country of France. These numbers don't include its 1985 revival edition, the Dolly.

Yet anyone looking at the car would think "Wow.. what an ugly contraption."

The Citroën 2CV was not built to win any design awards and it definitely wouldn't, but it's underpinnings were amazingly innovative. Dubbed the "toute petite poiture" (very small car), it had a tiny 2-cylinder engine putting out 375cc (eventually growing to 602cc) and while it wasn't fast or particularly powerful, it was capable of running all day, every day. It had only two turn signals, strategically placed so they could be seen from both front and rear, and its iconic roll-top cover could be rolled back or completely removed to accommodate even the weirdest-shaped load in the back seat. Seats, in fact, were easily removable and were simple hammock affairs - a far cry from the spring-loaded and cushioned seats common in most vehicles of the day (and now).

More innovation? There's plenty. How about 56mpg? Easily-removed and modular body panels for quick maintenance or replacement? Yep, just about everything on the 2CV, including quarter panels, is bolt-on. A suspension capable of carrying relatively heavy loads, but providing enough cushion that a crate of eggs in the seat could not see a single cracked shell, even after driving across a fresh-plowed field? It had that - one step further, it was fully independent, something only luxury cars of the time would flirt with.

Front wheel drive with a simple manual transmission with simple shifting? Check. Four-wheel hydraulic brakes? Yep. Rack and pinion steering? Uh huh. None of these things listed were standard equipment elsewhere, even on luxury cars, at that time.

Probably the greatest selling point of the 2CV was its removable and roll-off top and boot lid (later models had the boot covered with a standard metal, but still detachable, trunk lid). This made the car capable of doing just about anything.

It turns out, while farmers liked the little car, everyone else who needed a useful, practical, fun vehicle also loved the thing. It was the French VW Bug, but with versatility.

Its simple, but innovative design changed the world and become one of the most iconically French symbols of automotive brilliance to ever enter the marketplace. While Citroën was no slacker in technological innovation and style, their horse and buggy upgrade car that broke all the molds was to become the vehicle most-associated with the company, even today.

(Photo is of a 1950s German market 2CV, courtesy of the Wikimedia Commons)

Nicolas Zart wrote on March 20, 2012 - 4:48pm Permalink
I highly recommend everyone to drive at least once a Deux Cheveaux. It's an experience! No roll bars, and once you've successfully negotiated the dosage of accelerator and bouncing of the car, it stabilizes into a fun drive. They used to have contests to see who could overturn one. It has no torsion bars! It's practically impossible, save for running it down a hill at top speed and doing the sharpest turn you can manage... and even then, it was a very difficult matter. The car is hailed as running forever as long as you have a screwdriver, pliers and ropes. In fact is was clipped together! There was even a Doctor who manage to fit an engine on the back of one making it a 4x4. It's sad and normal to see how cars have changed. While security has improved, I welcome better brakes and better tires. I'm not crazy about the added weight, muffled feel and lack of feedback that have made cars a convenience that remove you from the fact you are driving a multi-ton iron on wheels contraption. What ever happened to the original Civic that got close to 54mpg compared to the new hybrid that does less? Maybe I'm just getting older :)
Aaron Turpen wrote on March 20, 2012 - 10:02pm Permalink
I personally miss the days of the land yacht. I'm a big station wagon guy and also a fan of big do-it-all machines like the pre-90's Unimog. Which is one of the reasons I like the 2. Even with that tiny little engine, the car was so light and soft that it could go just about anywhere and do almost anything - albeit not on the Autobahn. The skinny tires on this car were amazingly grippy, I'm told, but most of the surviving 2CV's have had larger wheels put on them to fit more modern tires. I actually stood up with my head out of the roof and steered while standing on the throttle in one of these. And you're right, you'll never flip one over without a jack.