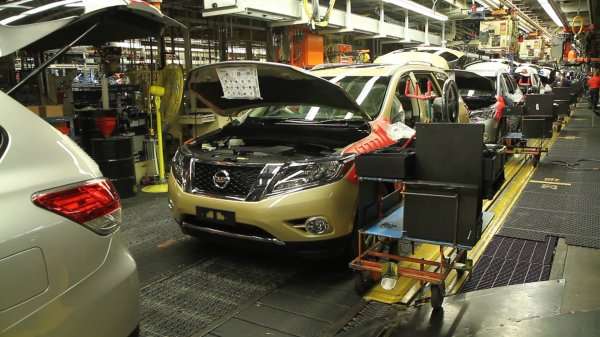 By early 2014, Nissan will be producing more than two million vehicles per year in North and South America.
Advertisement

Nissan is growing fast in terms of sales and market share and this means more production as the company works to stay ahead of the demand. Centered around the company's Smyrna, Tennessee headquarters and assembly plant (pictured above), Nissan is growing its production capacity in the Americas to over two million units in the next few months.

Nissan produces about half of that, about one million units, in its Canton, Mississippi and Smyrna plants alone, making them the cornerstone of the company's operations on this side of the globe. Other assembly operations take place in Mexico with three plants totaling about 800,000 units per year and in Brazil with facilities building over 200,000 units annually.

The tactic Nissan is following is to leverage against currency volatility by regionalizing production while simultaneously lowering costs and boosting brand awareness in the locales in which they sell the most cars. For the past few years, the company has spent more than $5 billion U.S. dollars in this expansion and is now adding more than 10,000 jobs across the Americas to make this production increase happen.

The largest plant in Brazil, capable of 200,000 units annually, is being built now. That plant will focus on V-platform vehicles in one of the fastest-emerging markets for Nissan. The company has been the top-growing automaker there for three years running. The new plant will build on the current small Curitiba, Brazil assembly plant which builds around 32,000 units annually.

Nissan's Mexican operations have snared it a spot as the top market-share leader there for over four years. The company's three plants there produce vehicles and engines for the Mexican and the North American markets, focusing primarily on passenger cars for that market and engines and chassis for the commercial markets.

Nissan also has plans for a new powertrain plant in Decherd, Tennessee, with taht plant opening in early 2014 to produce engines for Infiniti and Mercedes-Benz in the new Renault-Nissan Alliance. The plant is a joint venture with Daimler and will have a maximum capacity of 250,000 four-cylinder engines per year. This will be over and above the more than one million unit capacity for vehicle production Nissan already employs in the United States.