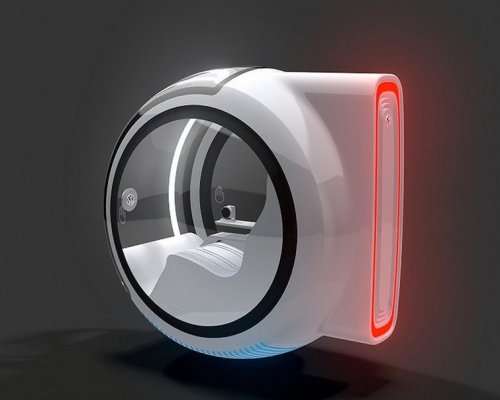 Part of the People's Car Project, in which Chinese citizens submit designs to VW, the Hover Car is one of the more compelling ideas to appear so far.
Advertisement

The People's Car Project was launched last year in China as a way to engage Chinese designers in the future of VW in their country. Meant to run for a year, the project was so successful that it's been extended indefinitely. One of the more compelling ideas to emerge from the initiative is the Hover Car concept.

Several example concepts are on display at Auto China 2012, including this one by an unnamed Chinese designer. The Hover Car is a two person commuter shaped like a sphere with a boot-heel-type tail at the back. The car would be very aerodynamic as well as relatively simple to manufacture - at least in terms of body work.

It's most unique property is the fact that it hovers. It uses magnetic levitation (MagLev) to both hover and propel itself, making it completely electric. How exactly the MagLev would work is not detailed, but the People's Car Project is about dreaming up the future, not explaining it. The idea behind the initiative and the designs it produces is to give long-term direction to Volkswagen in the important Chinese auto market.

Another design in the Project is the Music Car, which has organic light-emitting diodes (OLEDs) on its surface that react to the music the driver is playing. If you thought teenagers with their loud, bumping cruisers were annoying already, wait until they have light shows to go along with that..

Also displayed was an interesting idea called the Smart Key. What it's name lacks in originality, it makes up for in cool functionality. It's a slim key (9mm) similar to the key fobs currently used for many cars on the market, except it has something new: a small touch screen display in high resolution that uses a 3G network connection to get information from the car, allowing the driver to see fuel status, climate conditions, and security (door lock status, windows up or down).

While most of these ideas are probably never going to make it to market as-is, they are visions of the future that could be incorporated into designs that will be built. The Smart Key, for instance, may become an option in the near future as it's actually within the realm of current technology. The Hover Car, however, is not likely to appear anywhere but in a sci-fi movie. At least for now.

Daniel Harris wrote on October 30, 2013 - 11:35pm Permalink
I have let Searl Aerospace know of this concept car. They offer a quantal powered antigravity machine capable of being souped up to multiples of the speed of light but presently the idea is simply to make it hard to sell competing aircraft. Noteworthily they are also manufacturing in China so the Martians will likely all speak Mandarin shortly. Check it out read the work of Nikola Tesla, T.T.Brown, Hutchison, Carr, Bedini, Searl, join the Lifters Techgroup in Yahoo, YES THERE IS AN ANTIGRAVITY INDUSTRY BEEN FORCED OFFSHORE BY APATHY as happened to the Wright Brothers and their aeroplane invention.

Tesla Giga Berlin's New Hurdle: It's Not Only the Gov't, but Now Tesla Itself
Teslas Are Sold Out Until 2023, But The Timing May Reverse
END_OF_DOCUMENT_TOKEN_TO_BE_REPLACED