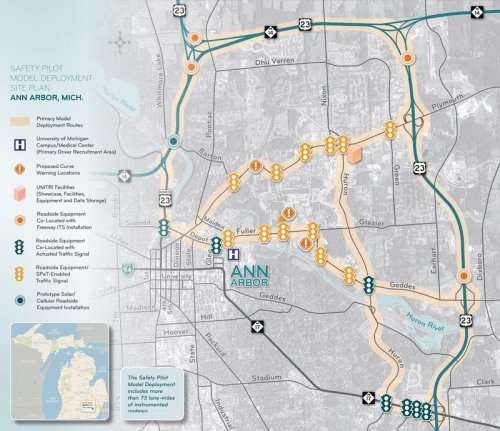 The U.S. Department of Transportation is conducting road tests of vehicle to vehicle and infrastructure (V2X) communications technologies. The tests, being conducted in Ann Arbor, Michigan, is the largest-yet test of V2X by the DOT.
Advertisement

The tests are being conducted in manned vehicles on 73 lane miles of Ann Arbor roadways, onto which 29 roadside equipment installations have been put in place for the vehicle to infrastructure (V2I) portion of the year-long test program. Test cars and trucks, most of which have been supplied by volunteer participants, are equipped with vehicle-to-vehicle (V2V) and V2I systems, which use WiFi and other connectivity to gather and share data from vehicles and infrastructure as well as record extensive data for the researchers involved.

The University of Michigan's Transportation Research Institute (UMTRI) is conducting the tests, called the Safety Pilot Model Deployment, on behalf of the U.S. DOT and the National Highway Traffic Safety Administration (NHTSA).

The transportation department selected the college town for the program due to its traffic mix, variety of roadway types and characteristics, seasonal weather and proximity to vehicle manufacturers and suppliers. The model deployment vehicles will send electronic data messages, receive messages from other equipped vehicles, and translate the data into a warning to the driver during specific hazardous traffic scenarios including an impending collision at a blind intersection; a vehicle changing lanes in another vehicle’s blind spot; or a rear collision with a vehicle stopped ahead; among others.

This is the second phase of the DOT's Safety Pilot for connected vehicles. Earlier this year, data from a series of "driver acceptance clinics" was released, revealing that most drivers who have experienced V2V technology have a favorable opinion of the benefits it can provide and would like it on their own vehicles.

The information collected from this second phase will be combined with the first and other programs and projects in 2013. This information will be used to determine whether rule making on the technologies would be beneficial, including setting standards or mandating the technologies. This second phase of the project involves participants including Ford, General Motors, Honda, Hyundai-Kia, Mercedes-Benz, Nissan, Toyota, Volkswagen, and communications supplier DENSO International America.

Elon Makes a Cybertruck Statement With an Action, But Quiet in Words
Tesla's Record Month in China: Doubled Registrations in March 2021
END_OF_DOCUMENT_TOKEN_TO_BE_REPLACED