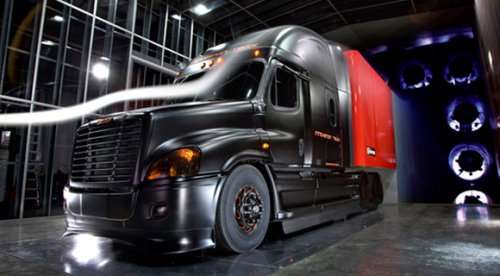 The time is right for commercial transportation to move away from petroleum and embrace new technologies. The shift has already begun.
Advertisement

For every hundred barrels of crude oil produced or imported into the U.S., about 8 go towards commercial transportation. Diesel fuel equals roughly 10% of each barrel of oil refined and most of that (roughly 80%) is used for commercial transport of one kind or another. One of the largest chunks of that use is in the trucking industry.

Commercial transportation has several advantages over passenger vehicles when it comes to ending its reliance on petroleum. First, it is generally more consolidated and requires less innovation to make a bigger impact. Second, it is a business-driven industry for which bottom-line improving solutions can quickly become adopted as the norm. Third, it is the largest single sector of domestic commercial transportation for which a singular fuel dominates.

While there are hundreds of trucking companies within the United States, there are only four domestic commercial truck producers and about half a dozen major manufacturers making up the North American market in total. Additionally, powertrain components are sourced from only about the same number of manufacturers. This means there is a lot of consolidation within the industry's supply chain. Without exception, every major manufacturer of heavy-duty commercial vehicles is experimenting with or has production models that are utilizing fuels that are not primarily sourced from crude oil. Premier amongst these are natural gas and biofuel options.

The commercial trucking industry itself is also seeing a lot of change in terms of business models. The primary driver of this change are fuel costs. These are usually charged over-and-above freight charges as a "fuel surcharge." Shippers (those who pay for the shipping) surveyed list surcharges as their number one gripe when it comes to transportation costs. Most believe that fuel surcharges are profit-making schemes whereas similar surveys of carriers (those doing the shipping) show surcharges are often a pass-through cost rather than a profit.

This rift has happened in the industry before, but on an opposite plane. In the 1980s and 1990s, a huge number of independent carriers went out of business or were bought out by larger carriers because of the sudden rise in fuel costs that made many of them - then using a straight shipping charge, fuel included - unprofitable. This gave rise to the fuel surcharge variable now standard in logistics - a surcharge that is given over and above the per-ton or per-mile rate paid for the transport of goods. This surcharge will vary depending on the current price of fuel (most commonly diesel).

When surcharges were implemented, it was seen as a way to equalize sudden changes in fuel costs as oil's prices jumped or dropped. The surcharge is usually agreed to before the shipping contract for an individual load is made, based on then-current fuel costs. If fuel jumps or drops during that time, the carrier will gain or profit accordingly, but overall, the surcharges will equalize the costs for everyone.

Carriers fear going back to a straight-charge model while shippers are pushing hard to get to one. This rift means there is a lot of potential for change in the industry. Change that is already happening.

Since surcharges are directly associated with fuel costs, if those costs can be made relatively static, then surcharges will no longer be seen as necessary. To make fuel's price relatively static, it must be based on something that is not as heavily variable as oil - which is subject to many market forces, most of which cannot be controlled domestically. Removing as much imported crude oil as possible from the metric means stabilizing fuel costs overall.

Seeing this, truck makers and their buyers (carriers) are moving away from diesel as a sole fuel source and exploring other options much more heavily. Natural gas has become well-accepted within the industry as an alternative that is both domestically-produced and cost-stable, with fuel prices currently about $1.50 less per diesel gallon equivalent. Cost of equipment in gas has dropped as well, with more model options (in engines) and manufacturers getting involved in the process. Availability of fuel is also becoming more widespread - especially in the Western United States - as more and more manufacturer-supplier-distribution deals (such as that between Navistar and Energy Fuels or between Flying J and Clean Energy) are made.

Paccar, which is the top producer of heavy duty long-haul vehicles in the United States, making both Kenworth and Peterbilt brands, is offering a natural gas version of several of its vehicle models while Navistar, another leading producer, has vowed to offer every one of its heavy-duty models in natural gas variants with several already at market.

Engine manufacturers like Case-International, Detroit Diesel, and Cummins-Westport are all offering or about to offer natural gas versions of their heavy-duty engine lines.

Other innovations including electrification (through battery electrics or hybridization) are also hitting the market. New truck makers like Balqon and Smith Electric are entering competition while current giants are building hybrids of their own. Hydrogen fuel cells are being tested in ports around the nation as clean, short-haul options and other innovations such as turbine engines and more are being developed. Biofuel use and production are continuing to rise as well, building bigger followings and more acceptance.

Further developments, such as the now-industry standard move towards more aerodynamic vehicle designs (gone are the flat-nosed big rigs of yesteryear) and innovations have been introduced. More and more trucking companies now sport trailer skirts, undercarriage baffles, smooth-lined truck designs, and even trailer tail cones. The adoption of alternative power units to prevent truck idling is almost universal with electronic "idle stoppers" being installed to go with them.

In the middle of the 20th Century, a much larger and more diversified trucking industry shifted from gasoline to diesel in about a decade's time as the benefits and payoffs to the fuel became obvious. Today, we could be seeing a similar shift as diesel becomes too burdensome to the industry and other alternatives are explored.

Kenema wrote on April 17, 2012 - 8:27am Permalink
Bio-fuel is no option. We get 1/3 less mileage and it's 10,000 times worse for the environment according to the greenies. One other thing, where can I top off my natural gas tanks?
Aaron Turpen wrote on April 17, 2012 - 11:29pm Permalink
In this case, biofuel means biodiesel, which is nowhere near the same as ethanol for cars. It's much more realistic, sustainable, and viable. Currently most biodiesel is sourced from soy, but breakthroughs in other sources (like algae) are happening now and will likely impact the market in the next decade. Biodiesel has exactly the same energy density as regular petroleum diesel fuel. As for natural gas, it depends on what you're using. There are public and private fueling stations all over the nation. The DOT maintains a database of them and there are websites that can find you a fueling station by specific area or location.