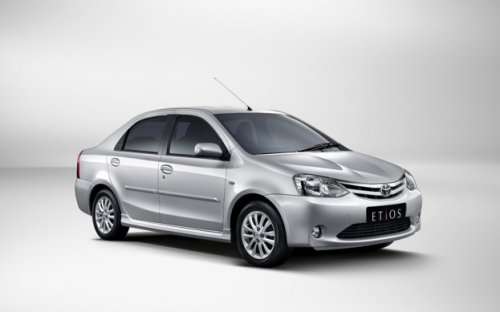 Toyota has announced a plan to develop eight new models of small cars for emerging markets. The cars will be largely designed and built in the markets they're being created for, including Brazil, China, and India.

The company states that it plans to sell half of its vehicles in those markets by 2015, a five percent raise from 2011 figures. To do that, the company will be building region-specific models such as the newly-introduced Etios compact sedan for India (pictured).

The Etios has a sticker price of about $9,000USD in India, far below the automaker's cheapest branded car, the Yaris, at $14,875. Toyota says they're aim is to sell these new market-specific models at or below the 1 million Yen range ($12,500USD).

Other companies aren't sitting around twiddling their thumbs either. Suzuki has hit India with its Alto. Nissan recently announced the resurrection of the Datsun brand for use in emerging markets and Mitsubishi unveiled its Mirage compact hatchback last year, aimed specifically at those markets. A year earlier, Honda pulled the cover off a new Brio hatchback for South American sales.

The big boys in Detroit are in the game too. Chevrolet plans to unveil its Trax compact crossover in Paris later this year and Ford plans to market several similar crossovers, starting with the new EcoSport in China.

European makers are struggling to catch up with only Volkswagen really pushing those markets with its rocking Santana.

Most automakers are well aware that these emerging markets in Asia, near Asia, and South America are going to be of vital importance for global sales and are pushing to be the top brand in them.