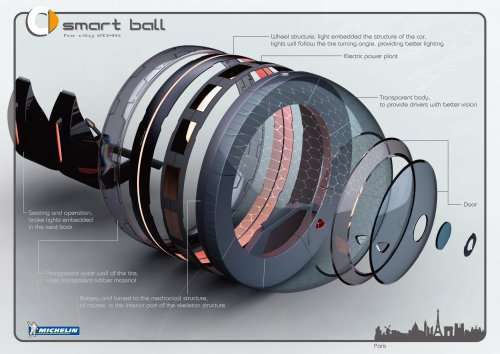 Every year, new designs made to meet a specific set of criteria are showcased at the North American International Auto Show (NAIAS) in Detroit. The Michelin Challenge Design sets up a scenario and then designers of all stripes (professionals, students, amateurs) submit vehicle designs based on those criterion. Here's some favorites from this year's Challenge.
Advertisement

Michelin's challenge this year was to envision what personal transportation in the city of the year 2046 would be like. Designs came in from around the globe and were as varied as imaginations can be. Some don't look anything like cars while others are distinctly car-shaped in both form and function. Here our the top ten picks according to this author.

#1 – Neuron by Ian Kettle
This car is first pick not only because of its cool, fluid design, but because of its awesome premise. Ian believes that technology will have advanced to the point that, in 2046, we will be able to think directly to our machines in a sort of telepathic way. He calls this the Brain Machine Interface.

With BMI, the Neuron becomes one with the driver or passengers. The car is designed entirely to function as a platform rather than an auto. The interior is nothing more than a series of pegs which humans can lie upon and that will conform to their shape. These pegs also act as connectors to the human, allowing the car to become one with the mind and thus do whatever the human commands.

Very cool and very fluid and futuristic to behold. Definitely a number one.

#2 – Shanghai Sphere 2046 by Oliver May
This design combines a car with a train and a ball. Oliver's idea is to create individual vehicles, in this case spherical, four-seat cars, that can link together to form trains for travel to common destinations. It's a very slick, urban transport concept that matches the needs of cities that have a lot of congestion and population.

The cars keep the occupants upright by means of a gyroscopic “floating" center around which the rest of the sphere rotates to propel the car. This is an idea that has been tried and proven in several real-world design studies. Next, these cars have small spheres sticking out at front and rear. These can magnetically link to other spheres to form trains. These trains then travel together down specific roadways and allow individual cars to separate and exit when they arrive at their destination.

#3 – EVO by Fabien Pace, Armand Herve, Magomed Oumalaev, and Anatole Vaillant
Imagine if an armadillo had four wheels instead of feet. That sums up the exterior looks of the EVO. This French team of design students didn't stop with that idea, though. A common theme amongst futurists and vehicles is that they will no longer be owned by the people driving them, but will instead by part of a sort of car-sharing collective. The EVO is that type of vehicle, being summoned or rented as needed rather than occupying a permanent garage or driveway under a person's personal ownership.

While Americans would be appalled as such an idea, Europeans are big on it. It has its merits, especially in urban environments (think New York, Paris, London). The rest of the design centers on flowing interiors with multifunctional seating and cars that are flexible enough to seat up to four and to shrink themselves for storage to minimize their footprint.

#4 – H2P by Xin ZheChen
This cool design has a flip-top lid on top of a sleek platform that seats two. It's low profile, big, extended wheels, and sleek color are matched by its innovative and thought-provoking propulsion system. The car converts sea water to hydrogen for energy. Hence the name.

What's more, the car is amphibious, so you can literally take it out on the water (to gather fuel) and go fishing or sunbathing at your leisure. Xin envisions that Shanghai will sink into the ocean as global warming raises ocean levels to the point where, in 2046, the city's inhabitants have adapted their lifestyles to a “floating city" above where the old one lie.

#5 – Four Walled Car by Kayvan Naderi and Mohammad Hossein Amini Yekta
This is a radical re-think of the car itself. The car itself would be part of a shared rental scheme, similar to the EVO above. However, it's a three-way design which shifts according to driver preference and stability needs for city versus highway movement.

The Four Walled Car can stand up to make itself have a smaller footprint when parked, extends into a “comfort profile" for seated driving and extends and lower into a more motorcycle-type profile for high speed and performance driving. At each stage, the rear wheels extend further out to increase stability.

#6 – Smart Ball by Mu Cong and Dai Wei
This is another rolling ball concept. This sphere expands and contracts according to parking situation and need. It seats two and is completely transparent except for the central tire. The vehicle tilts (passengers remain upright via the gyroscope) and rolls for stable turning and lighting automatically follows the turn for better visibility. The brake lights and rear indicators are on the seat backs.

#7 – Konewheel by Ebru Guzelderan and Baris Cengiz
This car looks more like an amusement park ride than it does a car. It's kind of a spiral staircase-shape with a hoop on top over which a clear glass dome can be used in inclement weather. It seats one and is meant as an urban, personal transport device for streets and sidewalks. The wheels are interesting, the larger encompassing most of the vehicle on an angle while the smaller acts as a sort of stabilizer.

#8 – Jeep Unlimited by Geeho Cha
This is a beach buggy and boat all in one. Meant as a lifeguard's companion machine, it is a high speed amphibious car that can travel up to 70mph even on water. To be honest, while it looks neat, it's not really new, but the photos include scantily clad people in beach wear, so it had to make the list.

#9 – Snake by Liwen He
This car placed on this list purely out of its cool looks and by how awesome it looks like it would be to drive. The car literally snakes with the two front wheels being able to bend the central fuselage of the car to steer it as the back tires follow. Driver and passenger sit over the rear axle. Very cool.

#10 – Volkswagen Beach Rescue: Rio De Janeiro by Sebastian Toddenroth
This is another amphibious beach buggy design. It beat out the others to make this list, however, because it's a pretty cool-looking design and it utilizes multi-directional tires instead of steering. This means it can literally move in any direction – forward, reverse, laterally on any angle, or even slide left-right. It's body is shaped like a catamaran to glide over the water.