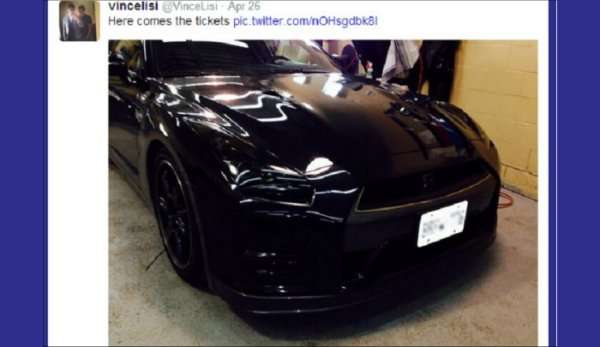 A Canadian teenager faces serious charges after he is caught on the highway at more than 140 km/h over the speed limit thanks to his parents buying him a Nissan GT-R.
Advertisement

So here's the scenario. Last month, a teen boy in Canada receives something all teenage boys dream of: a Nissan GT-R as a gift from his parents. The $100,000 sports car, capable of beating Ferraris and Porsches off the line, is the dream machine many a young man pines after.

When the kid got the car, he immediately tweeted to his friends what would be the understatement of the year. "Here comes the tickets," his tweet with a photo of the black GT-R opined. Now, his car is in impound, his driver's license is also impounded, and he faces huge fines and penalties. It remains to be seen whether or not the kid's parents will pay them on his behalf.

In what should have been the most predictable scenario ever, the teenager received his Nissan GT-R, presumably as a birthday present, and within a week was clocked at 150 miles per hour (240 km/h) on a Toronto highway, according to the Global News in Canada. That happened to be 100 kilometers an hour over the posted speed limit of 100 (that's about 55mph, American).

Although information on the penalties has not been publicly released (and likely will not be unless there is a court hearing), the Toronto area imposes severe fines for infractions that are far less than what this boy is said to have done. A 50 km/h over limit infraction, according to the Toronto police department's website, means an automatic week-long (7-day) suspension of driving privileges effective upon the arrest/accusation and the court can then extend that to up to two years. Fines range from $2,000 to $10,000, depending on the mood of the judge and the circumstances surrounding the infraction.

I could find no information on what 140 km/h over the limit would mean. It's very likely that this teenager won't be able to drive until he's out of his teenage years. Because he's just now 18 years of age, his parents are not likely to be held liable for the infraction either.