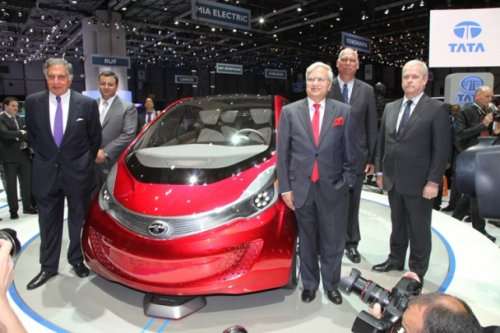 Move over and make some room, Opel Ampera, there's a new RE-EV coming from India's largest automaker and Tata has pulled out all the design stops for this little powerhouse of engineering.
Advertisement

Most Americans are unaware that one of the world's largest automakers is based in India. Tata Motors currently builds some of the most common vehicles seen on the roads of Asia and parts of Europe and is one of the more innovative world automotive companies of late. Following on their Pixel concept, which debuted last year at the Geneva Motor Show, Tata unveiled an upgraded, larger, and even more technologically advanced version, which they're calling the Megapixel.

This new concept is a range extended electric vehicle (RE-EV), which means it operates as an electric car that uses an on-board gasoline engine to extend its range in a way similar to the Chevrolet Volt or its European sibling the Opel Ampera. Unlike the Ampera, however, the Megapixel is capable of making a 180-degree turn inside a lane, can be recharged without plugging in by using inductive charging, and it is all wheel driven (has four motors); and it does all of this while seating four comfortably.

The Megapixel uses lithium-iron phosphate (LiFePO4) batteries that can be charged through an induction plate fitted to any parking space or garage. So, rather than plugging into a wall outlet, the car can be parked over the top of the charging station and charging begins automatically.

The car's four motors propel it to a maximum speed of 68.4mph and its total range is 559 miles, about 40 miles of which are all-electric. One of the Megapixel's greatest assets is in its intelligent use of those four motors, using them to propel each wheel individually so that, along with the car's four-corner wheel placement, the Megapixel can turn within a radius of only 2.8 meters - just over nine feet. That awesome turn is coupled with one of the more innovative door systems seen on a concept in recent times.

To top off the Megapixel's excellent city cred are its four sliding doors. None of the doors on this Tata concept open outwards, they all slide to minimize the space required to get in and out of the vehicle - a big bonus in crowded urban settings. The front doors slide forward and the rear doors slide back, giving completely pillar-less access to the interior.

The design of the car was conducted at multiple Tata locations, including their centers in the United Kingdom, India, and Italy. Tata has not released any production plans or price points for the Megapixel and since the company has no operations in North America, it's unlikely it would ever be seen here.

Here is an excellent marketing video produced by Tata for the Megapixel: