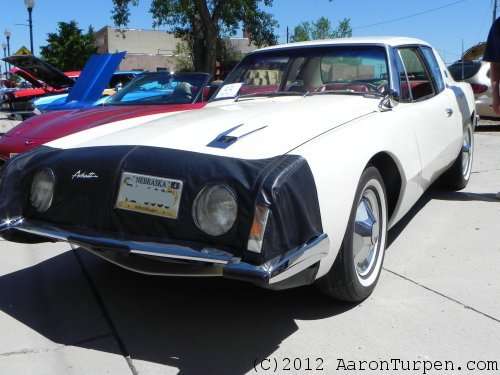 The Studebaker Avanti, the car that never dies

Possibly the most intriguing car in American design and production history, the Avanti is the 007 of classic autos, at once mysterious and eye catching, its history is as storied as its mythology. Learn for yourself at the Studebaker National Museum in South Bend, Indiana where the car is on display.
Advertisement

A few days ago, at the Burns Day Parade in Burns, Wyoming, I saw something that amazed: a 1963 Studebaker Avanti cruising down the parade route with the other classic cars. This car is the most elusive of collector cars and one of the most classic American car designs to have ever been produced. The car's design is breathtaking on its own, but the legends and controversy surrounding it only add to the appeal.

The Avanti was Studebaker's last grasp for revival and was meant to be the automaker's savior on the market. Ostensibly designed by the legendary Raymond Leowy, to say the Avanti was a fast-track design-to-production is like saying Michael Jordan was a pretty good basketball player. The Avanti went from Studebaker CEO Sherwood Egbert's sketches hastily scrawled on paper to a full-fledged production car in just over a year. The design was largely thanks to a 3-man crew assembled by Leowy and the internal chassis and power plant teams at Studebaker.

In 1961, in deep financial trouble, Studebaker's new chief executive was desperate to bring the company around and knew that they needed something dramatic and powerful to pull themselves up and back to greatness. By then, the automaker was already fifty years old and was one of the oldest car builders in the United States. The venerable giant had been losing out to Ford and Chevrolet for years and by 1961, Studebaker was hovering on insolvency.

From desperation can come greatness. The Avanti was introduced in April of 1962 at the New York auto show. The fiberglass-bodied luxury car was an immediate sensation, the four-seat personal luxury car had a price tag more than double the Chevrolet Corvette and competed with the then-new Buick Riviera at $4,445. The Avanti was very well-received, however, and the few Studebaker dealerships still remaining were flooded with orders for the car.

Egbert hoped to produce 20,000 of the cars that first year (1962, model year 1963) in the three variations offered - a base V8 in 289 cubic inches, and a Paxton supercharged R2 or R3 model. Many collectors say that the Avanti was not just a personal luxury car, but was the first of the pony cars that would dominate the blue collar muscle car scene a few years later.

Production hit continual delays, mostly due to the fiberglass fabricator chosen to do the job and their inability to keep up with demand. Delays cost Studebaker orders and customers and ultimately limited 1963-64 model year production to only 4,600 units. Production was halted and not long after, Studebaker closed its doors. Conspiracies immediately popped up, a sort of "Who Killed the Avanti?" circulation of half-truths and speculation similar to the Who Killed the Electric Car? conspiracy surrounding the Chevrolet EV1. In the end, the truth is simple: Studebaker, in their hurry to begin making the Avanti, trusted the fiberglass fabrication to a company in Ohio that was completely unprepared to meet the expected demand. Production delays, however, did not really kill the Avanti.

Rights to the design were sold to two Studebaker dealerships who went into limited production of what are now known as the "Avanti II," which used the same Lark-based frame and chassis elements, but incorporated General Motors engines and drive trains meant for the Corvette. These post-Studebaker Avantis were produced in small quantities through the 1970s and into the early 1980s. A new owner of the franchise, Stephen Blake, then produced an updated 20th anniversary car for 1983 and introduced a convertible.

Blake failed to make a go of it and sold the company to an ethanol developer named Michael E. Kelly, who resumed production in 1987 and built cars until 1991 using GM platforms for the underpinnings. It wasn't profitable, however, and Kelly closed down production. He started it up again in 2001 under a new design, being built in Villa Rica, Georgia and then moving to Cancun, Mexico. Using a Pontiac Firebird as the platform and later a Ford Mustang chassis, Kelly built cars until 2007. Then the U.S. Justice Department stepped in, charging Kelly with real estate and financial fraud and seizing his assets.

Now, the Avanti name, designs and rights are once again going up for sale. Restitution efforts against Mr. Kelly include selling off these rights as well as the avid collector's entire collection of classic cars.

Purists look to the 1963-64 models as the best of breed. Others prefer the newer upgrades made by successive builders. Regardless, the Avanti remains a true classic of American auto design. It's both timeless and undeniably classic. It's checkered past and whispered mythology only enhance its longevity. Probably its most powerful feature is the fact that it's beauty is as relevant today as it was fifty years ago. Very few cars can lay claim to this kind of timelessness.

The history of the Avanti, along with select originals and restorations, can be fully appreciated at the Studebaker National Museum in South Bend, Indiana through October 5th. The museum has published a book to accompany the exhibit, both titled Studebaker's Last Dance.

Nick wrote on December 12, 2014 - 9:30am Permalink
Two errors in your report. In 1962 Studebaker was 110 years old making it not only one of America's oldest auto makers, but the world's oldest wheeled manufacturer. Also omitted was the short Caforo period in the early 90's when production was moved from Studebaker base South Bend to Youngstown, Ohio,
onaroll wrote on May 19, 2016 - 5:23am Permalink
The term 'Classic' as applied to autos has various connotations on different continents. In the USA the category ended with the 1946 Lincoln Continental. Other appelations to more recent "collectible" cars have been applied, none of which became official. In Britain, any humble old crock survivor can claim the name 'Classic'. Perhaps we should call cars like the Avanti a "class act." which sounds just like Classic!