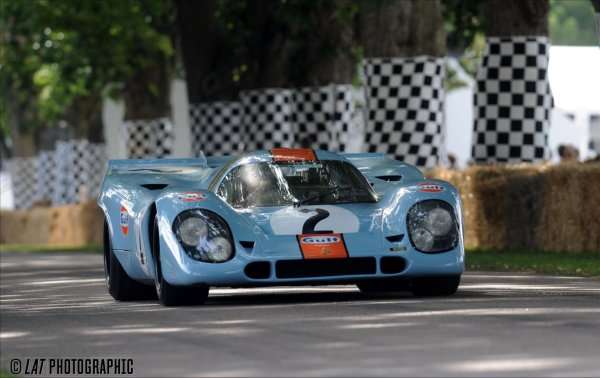 One of the largest classic motor shows in the United Kingdom features a car that is likely as well-known to automotive film buffs as is McQueen's Mustang from Bullit, the Porsche 917 from Le Mans.
Advertisement

The Lancaster Insurance Classic Motor Show is one of the largest classic vehicle shows in the UK and often features great cars sponsored by Classic & Sports Car magazine. This year, the magazine has brought one of the most iconic and recognizable sports cars from film, the Porsche 917 Le Mans racer that was featured as Steve McQueen's race car in the film Le Mans.

The show's theme this year is "The Big Screen," so the car's coming out of the garage is fitting. The 917 lives at the Spa museum in Stavelot, Belgium and has traveled to Birmingham, England for the show. There, it recreates the film alongside other props.

The Porsche is privately owned since 1973 by Classic Autos of Kings Langley and is chassis 917 013/034 and was not just in the film with the King of Cool, but also has several legitimate race wins besides. This particular Porsche 917 Le Mans car was used in the film alongside mockups (mostly for the cockpit). Its race history includes wins at the Daytona 24 Hours, Monza 1000km, and had more legends in its seat than nearly any other car you'd care to name.

Alongside the Porsche 917, one of the highlights of the Classic & Sports Car booth are photographic prints showcasing historic racing vehicles, drivers, and teams. Most classic sports car owners know that if they want period prints of their car when it was in action, chances are, the magazine has them. Usually through its partner, LAT Photographic, who generously offered the print at the top of this story for use.