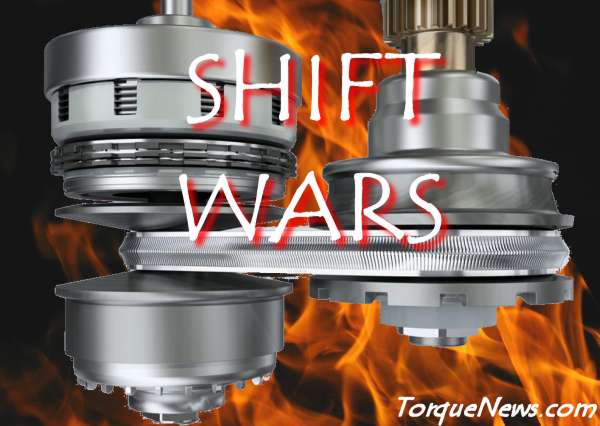 Two Japanese rivals, Nissan and Toyota, are battling it out with continuously variable transmission (CVT) technology, with the focus being primarily on whether to shift or not to shift. That is the question behind the Shift Wars. Now let's consider the answer.
Advertisement

Recently, John Goreham here at Torque News talked about Toyota's new CVTi-S, or Continuously Variable Transmission, intelligent Shift - a new generation of their CVT-i technology - and compared it to the leader in CVT by volume, Nissan, whose current-generation Xtronic CVT appears in most of its small and midsize passenger vehicle line. Read John's article here.

John hinted at the only major difference between Toyota's CVT and Nissan's - that being the "shift feel" that Toyota programs into theirs. Being a fan of both vehicle brands - I am the "Nissan Guy" here at Torque and have owned several Toyota vehicles as well - and a big fan of the implications and technology behind the continuously variable transmission, I had to respond to John's remarks.

"John, you ignorant.." was my first jump. Since that's not exactly family-friendly, though it is a funny reference that only people of John and my generation would understand, it would have been a good opening line had I planned to make this into a hit piece. Instead, I will outline how a CVT works, the difference between Nissan and Toyota CVTs, and discuss why they chose to deviate on that particular point.

How a CVT Works
This will be a nutshell overview of the basic idea behind a modern continuously variable transmission. Bosch estimates that about 25 percent of passenger vehicles being sold will soon feature a CVT, so it's a fast-adopting technology that's here to stay.

Believed to have originally been invented by Leonardo DaVinci, today's CVT is a far cry from what the Italian Master designed. Most automotive CVTs today are of the Variable-diameter pulley (VDP) (aka Reeves Drive) configuration. The picture above is of one of those, the one being shown in particular being designed by Bosch as one of the more common off-the-shelf CVT options. It consists of two hourglass-shaped pulleys with a metal belt between them. Rather than shifting from one gear ratio to the next, as in a geared transmission, the CVT instead varies the input to output ratio by adjusting the diameter of the two pulleys continuously and on-demand.

The input pulley (the one receiving power from the engine) will open and close its hourglass to move the belt up and down the hourglass walls, giving tiny, incremental adjustments to how much spin speed the input is giving the belt. Meanwhile, the output pulley (which sends torque out to the drive shaft or axle) proportionally grows or shrinks in opposition to the input pulley. For example, as the input pulley sucks in (slows turn rate to belt), the output pulley pushes out (shrinks to increase turn rate to output shaft). In this way, the belt is always kept under tension and the input to output ratios can be almost infinitely adjusted.

Most of the modern improvements to make this design viable in automotive are in the belt between the two pulleys. Until only relatively recently, the metallurgy and precision required to make the belt itself didn't exist. CVTs on heavier passenger vehicles like small and midsize cars were not very reliable due to the pressures put on the belt used to drive them. Although the belt between the pulleys is called a "belt", it is in reality a very intricate and flexible chain. The exact design of the chain will vary somewhat between manufacturers, but is broadly the same no matter who's made it.

It will consist of many tiny links in two chains, between which is suspended a series of intricate hanging slats. The chain's design is meant to maximize its surface area towards the pulleys at any given angle or ratio. Because it is metal, it also adds the dynamic of being capable of both pushing and pulling when running across the pulleys, which allows higher amounts of torque to be applied to it without fear of it giving way.

The near-infinite adjustability of the CVT allows the optimum ratio of input to output to be maintained, which keeps engine RPM at their most efficient for the output (speed, torque) required from the vehicle at any given time.

The Difference Between Toyota and Nissan
The major difference between Toyota's system and Nissan's application of the CVT is simple: Toyota adds in that "intelligent Shift" part. Any CVT, including those made by Nissan and Toyota, are computer-controlled and programmed to operate in a specific way in any given situation. Toyota chose to add on the "-iS" part for two reasons: first, "i" is their branding for anything they program to optimize and is used on their variable valve tech (VVT-i and variants) and other technologies; second, Toyota's system mimics the shifting of a standard automatic transmission.

Toyota says that this second point, faking a shift pattern, is the result of customer and journalistic feedback on the way their first-generation CVT operated in their vehicles. Journalists in particular didn't like the "whining" way it operated and the odd slip feel a CVT can have for those who listen and feel for problems in their transmission - the feeling is similar to when a gear begins to slip and an automatic transmission is about to have a serious failure. Because of this feedback, Toyota felt it better to optimize for drivers who are used to "shifting" rather than for pure economy and sport output.

Nissan, however, has decided not to change anything and instead tunes their CVT installations to keep the engine running at optimum RPM for the driver's current demands. This means that in the Altima, for example, the CVT will hold RPM at about 2,500, which is the 3.5-liter V6's optimum RPM level for fuel economy in that car. When in Sport mode and pushing the pedal to the floor for maximum acceleration, the CVT then moves to holding the RPM rate at the engine's peak torque output, which is in the 6,200 rpm range. This gives a continual G-push for the driver rather than the intermittent push-pull a shifting transmission has.

Which approach is better?
As John pointed out in his article, Nissan has gone for broke with their CVT offerings, putting one in just about every passenger vehicle they make as at least an option. It is standard in the Maxima, Altima, Sentra and many Infiniti models as well. It's also the standard in the Juke, Rogue and other crossovers. It's also the automatic transmission option for the little Versa and the new Versa Note. Comparatively, Toyota has rolled it out in very few models to-date with the 2014 Corolla being the flagship for the new CVT-iS. It should be noted that the CVT standard in the Hybrid Synergy Drive vehicles in Toyota's lineup is a very different technology from the standard combustion engine CVTs we're talking about here.

The question of which approach is better depends on your view. Many automotive nuts and "car geeks" are locked into the geared transmission, which is still standard in nearly all sports cars, most trucks and heavy SUVs, etc. I myself have driven vehicles utilizing transmissions with anywhere from 3 to 18 gears. In heavier applications, such as full-sized cars and trucks with V8 engines and high torque outputs, the CVT is not yet ready to be a player. The vast majority of automotive consumers, however, are not car geeks or gear heads. Polls have shown that most American car owners don't even know how to properly jack up a vehicle to change the tire. All they'll notice in a transmission is whether or not it's smoking or won't move the vehicle any longer. They couldn't care less if it "shifted" or not, in my opinion.

In that regard, I believe that Nissan's approach is the better for the longer term. Toyota is treating the CVT, I believe, as a "stepping stone" rather than a technology unto its own. Being the best-selling vehicle maker on the planet, however, maybe they know what they're doing. Who am I to say? On the other hand, I think that Nissan's approach will pay off by simply getting consumers used to the idea of a CVT faster and optimizing its benefits sooner. This will pave the way towards other, better improvements down the line.

What do you think? Spell it out in the comments below.