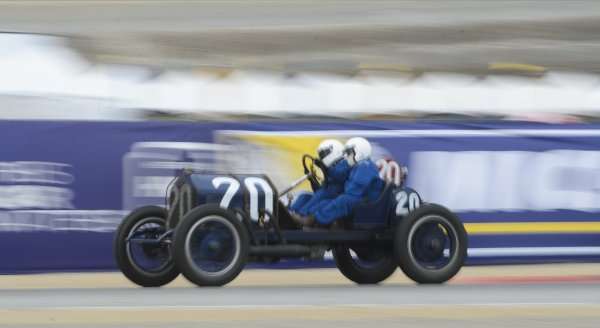 Imagine, if you will, a living museum of 550 historic and period-correct race cars ascend on one location to participate in 15 race groups over four days. That is what will be happening this August at Laguna Seca.
Advertisement

Let's say you can travel to Monterey, California this August and have secured tickets to the Rolex Monterey Motorsports Reunion. Your lucky self will be greeted with automotive racing history (both figuratively and literally) as 81 years of race cars fly around the Mazda Raceway Laguna Seca before your eyes.

The oldest car that has been accepted to the race is Brian Blain's 1911 National 40 (pictured), which screams out a massive 100 horsepower. This car was driven by the legendary Charlie Merz in the first Indianapolis 500 in 1911 and finished seventh, with an average speed of 70.36 miles per hour. Take a look at the photo and imagine going 70 miles per hour in what amounts to a motorcycle with four wheels. Yes, you'll need goggles and guts.

Cars from the United States, Australia, Belgium, Brazil, Canada, Germany, Italy, South Africa, and the United Kingdom will all be on the track at Laguna Seca over that long Rolex weekend. Maserati will be celebrating its centennial with heritage display and track cars, including the Birdcage (Tipo 60, 61) and the 300S and 450S from the Mille Miglia. Also in attendance will be the 1939 4CL that was the first race car of that famous line that the company ever produced.

Not to be outdone, the Sunbeam Tiger will celebrate its fiftieth anniversary in an homage to the great Carroll Shelby, who modified production Tigers for racing, starting with the 1964 24 Hours of Le Mans.

The newest car on the track will be the 1992 RX-729P GTP in its first chassis (001) from Mazda, one of two prototypes that competed in the 1992 IMSA GTP championship. The 720-horsepower behemoth will take the track again this August.

Not to be left out, though, Porsche will be presenting no less than sixty-four (count 'em, 64) cars at the Rolex Monterey Motorsports Reunion. Starting from the classic 356 through to the 911 and 962, Porsche will be lining them up for competition.

Few events attract as many racers or celebrities in and around automotive and racing. It's common to see figures like Jay Leno in attendance along with visits from stars of shows like Top Gear as well. In addition to the racing, many collectors display their automotive sports memorabilia and cars at the event. This is one of the most historic and fun of American motorsports events.