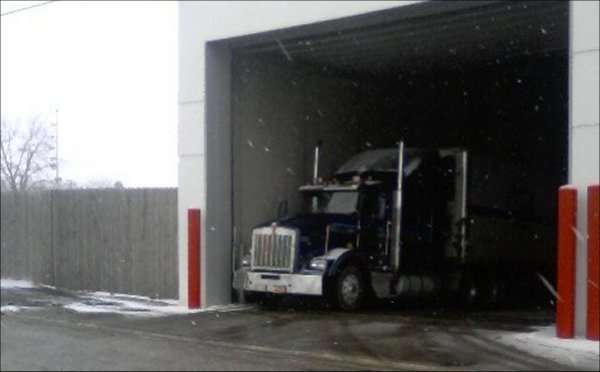 Road & Track Is Clueless About Big Rigs and Traffic

A recent editorial in Road & Track Online proves that when it comes to big rigs and professional trucking, many automotive journalists don't know Jack. Let's set them straight.
Advertisement

Recenty, a Road & Track editorial piece by Jack Baruth called for forcing big rig tractor-trailers to use the right lanes on the Interstate. His rationale? They slow down traffic and clog up lanes as they slowly make their way through, apparently intent on making his and other drivers' lives miserable.

There are a few things wrong with Jack's poignant story about waiting for trucks to pass one another and the frustration the car drivers around them feel. Baruth's frustration is common and I've felt it myself, but his solution is only to create more problems by forcing trucks into the right lane. His other remarks in which he insinuates that truckers are all drug abusing, sleep deprived killers waiting to happen are a sad aside. He also severely underestimates the financial and economic impacts his idea of forcing trucks to drive slower and in one lane would create. Finally, he ignores the two major reasons trucks are traveling so slow, which, if he understood them, would greatly impact his idea of using government to force a "fix."

Let's start at the beginning. Some of you may know who I am and why I'm qualified to write on this subject. I'm an automotive journalist, yes, but I'm also a former truck driver who drove over the road across all 48 states in an 18-wheeler hauling everything from motor oil for your car to groceries for your table. That is my truck in a Chicago-area dock pictured above. In three years as an over-the-road (OTR) driver, I put more than 300,000 miles on our nation's roads and did so completely accident free. I can tell you that truckers are an odd lot, a mixed bag that represent the overall melting pot that is the United States. Yet they have a common bond despite some being white southern boys, others being Sikhs in headdress, and others being cigarillo smoking Latinos. That bond is exemplified in the gears, diesel, and rubber that make up driving a big truck. A trucker has a job that is statistically less safe than the average police officer's, yet they do it with fewer accidents per mile driven than almost any other driving segment. This despite the majority of accidents involving big rigs being the fault of the cars around them rather than the trucker's.

Trucks travel slowly for two reasons: first, they pull a lot of weight - the average trailer behind that big rig Baruth hates so much is carrying in the neighborhood of 30,000 pounds of freight and most trucks are capable of legally pulling around 45,000 or so pounds of freight. That's a lot of food, a lot of Christmas toys, a lot of car parts, and a lot of all of the other things that make living in America so economically great for the majority of its citizens. Few would say that we have a lower lifestyle, even at our poorest, than the average person does globally. A huge chunk of that lifestyle is thanks to trucks hauling goods to power our commerce. Feel free to Google it.

The second reason they move slowly are fuel governors. These are speed-limiters on the truck that many companies and drivers use to keep the truck from going faster than, say, 65 mph. Slower speeds do improve fuel economy, but there's a down side to that: the driver gets paid by the mile, not by the hour, so slower speeds also mean less income. Further, speed governors are often used by trucking companies as punishments for drivers. A driver who is late with a load, gets in an accident (even if not at fault), or forgets to turn in some kind of safety paperwork may be punished by having their speed reduced by 1 or 2 mph. This makes that 65mph truck a 63 mph truck. The trouble is, that punishes everyone around that trucker too, including Mr. Baruth and those who think like him.

The funny thing here is that speed governors are a relatively new phenomenon in trucking. Fifteen years ago, they were unheard of. They came about due to the fuel crunch as diesel fuel prices rose and corporate profits in trucking fell. This was after trucks had evolved from the black smoke spewing rigs of the 1970s to the scrubbed exhaust, vapor-emitting rigs of today. The environmental concerns of the 1980s over smog and particulate emissions meant that the government, via the Environmental Protection Agency, cracked down on diesel emissions and began implementing all of the restrictions that are in place today. Those restrictions meant that truck designers focused on improving emissions and largely ignored fuel economy. Hence we have big rigs now that achieve only 5 or 6 mpg but have exhausts that are often cleaner than your gasoline car's.

Mr. Baruth's "right lane rule" would mirror what is already in effect in many states and his speed limiting rule would also mirror that which is already in many states. Were the R&T reporter to take a trip to California, for example, he'd find that they have had a lane restriction and split-speed rule for years and that it has, not surprisingly, done little to alleviate accidents involving big rigs. Half-jokingly called the "Commie Corridor" by truckers, the I-5 interstate from California to Washington requires drivers to stay in the right lanes while passing through most major cities and restricts them to 55 mph (versus the 65 mph limit for cars). Yet accidents in the corridor are higher than ever. Anyone who drives the I-5 could tell you why: cars jockey around trucks who're moving far slower than they are and often take big risks in order to make small gains on a road system that is already over-crowded on top of the inane rules.

Finally, let's talk about regulation itself. Currently, the federal government, unbeknownst to the majority of non-truckers, heavily regulates the trucking industry. The federal government regulates drivers directly as well. Truckers are restricted to 11 hours a day of driving, 14 hours a day of "work" (meaning anything that isn't sleeping or eating), and these are "consecutive." Once the 14-hour day begins, it doesn't end until a substantial rest period has been taken. In other words, schedule or not, the driver must work within a restricted time frame to get the job done despite the myriad of things that can interfere; including things like traffic, accidents, odd delivery and pickup hours, weather, etc. This problem is often caused by rather than solved by the regulations in place. Since I left truck driving to become a journalist, the rules have only gotten tighter. If there is a drug problem in trucking, Baruth's idea is only going to make it worse as drivers work within an even more restricted schedule. All for an average income, by the way, that Baruth and his ilk would likely find laughable.

Now let's talk solutions. My simple solution, proposed on Road & Track's Facebook page as well as the comments section of the referenced article, would alleviate Jack's issue and solve a lot of similar problems from the truckers' point of view. It's, in essence, the same idea Jack had, but flipped. Instead of restricting trucks to the right lane, let's restrict automobiles from the left lane in major metro areas. The logic is simple: trucks are generally passing through, not stopping, and "beltways" and the like have merely become more clogged arteries rather than the bypasses they were once meant to be. So the solution is to push trucks into the left lane and let the cars, who're entering and exiting continually, have the right hand lanes so that they can safely do so without passing in front of or trying to get around trucks in the process. This would make situations like this one far less likely.

This solution has been lauded by truck drivers and others at both of the places I've shared it. It's simple, makes far more sense than the right lane, slower speed restrictions that would only add to the safety issues already happening, and allows commerce to flow unimpeded. The only argument given against this plan, so far, is that we're culturally tied to the idea that the left lane, even in heavy traffic, is somehow the "fast lane." Despite the obvious evidence to the contrary, as witnessed by any rush hour driver in any city in the United States.

Oh and John Baruth.. the next time you drive that little Honda Accord of yours, remember that everything on it, the gas you're putting in it, the tires you're rolling on, and the asphalt you drive it upon were all brought together by trucks. In fact, so was the food you ate before you took off on your drive and so was the clothing you put on that morning before going out. You might not like the trucks that sometimes make your drive inconvenient, but you have to admit that you enjoy far more convenience in your life because of them.