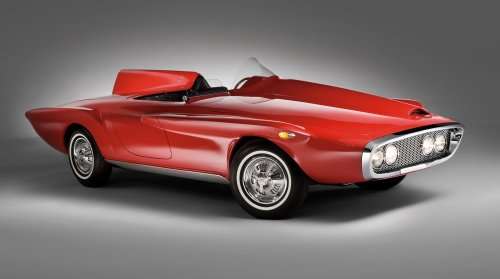 The 1960 Plymouth XNR, an operational concept vehicle made by famed designer Virgil Exner and once owned by the Shah of Iran, sold at auction this weekend for nearly a million dollars.
Advertisement

A one-of-a-kind concept vehicle designed by Virgil Exner, the famous Chrysler designer, and once owned by the Shah of Iran came up at auction in California this weekend and sold for $935,000.

The car, a working concept built to showcase the future thinking of Chrysler-Plymouth in the early 1960s, was built as a working, driver-ready roadster. At the time, to show off the capabilities of the car (and by proxy its designers and the company whose nameplate it carried), the XNR was put on the race track and sped to over 150 miles per hour using its innovative 260 horsepower slant six engine.

The car was technically owned by Italian coachbuilder Ghia, who'd build it for Plymouth, and once its show days were over, they claimed ownership and sold it. The XNR eventually ended up in Iran where the then-Shah kept it in his stable of classic collectibles. Later, the car went to Beirut by unknown means. During the Lebanese civil war, however, it came to the attention of a car collector who, for years, moved it around to avoid seizure or damage. In 2008, Karim Edde, its then-owner, sent it to RM Restorations for thorough work.

This past weekend, RM Auctions (sister to RM Restorations) put the car on the block on behalf of its owner and brought the princely sum of just shy of a million dollars for the one-off concept car.

Arguably, the Plymouth XNR is one of the coolest concepts to ever be built and shown. The fact that it's a working, road-worthy, sheet-metal-clad prototype instead of a fiberglass shell of a car only adds to its awesomeness. The restoration was done over a two year span based on extensive photography taken by various magazines and photographers at the time of its showcase heyday as well as from Exner's notes and materials provided by his son, Virgil Exner Jr.

Tesla Contemplates A New Strategy for China Retail even As Sales Boom
Jay Leno on Elon Musk & EVs: “I Think He Should Get ... Credit"
END_OF_DOCUMENT_TOKEN_TO_BE_REPLACED