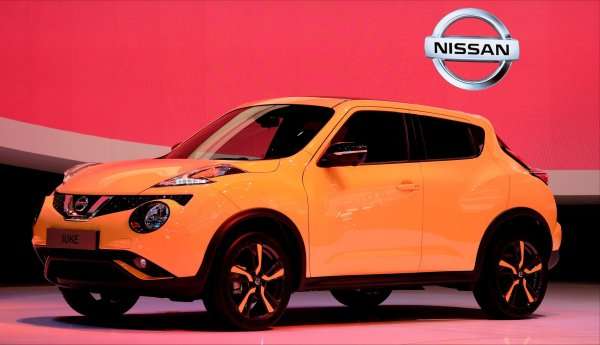 Nissan unveils the new Juke at Geneva - what will we get?

The European version of the new Nissan Juke has unveiled at the Geneva Motor Show. How much of this great new look is coming to America?
Advertisement

At the Geneva International Motor Show in Switzerland, Nissan has unveiled the new-generation of the Juke crossover. Several changes were made while keeping the original look and idea of the little Juke intact. We think they've hit the mark well with this refresh, but there is uncertainty as to how much of the European Juke's new appeal will make its way to North America.

From some of the upgrades, we can deduce their significance and likelihood that they'll make it across the pond. Some of the items added are already on other Nissan vehicles, particularly the LEAF electric car, while others are very likely only for the Euro market. Let's look through these changes and then deduce whether we'll see them here soon.

The Nissan Juke with this new design has several upgrades. To walk us through that, Geraldine Ingham, General Manager, Nissan Europe, walks us around the Juke on the stage at the Geneva show to highlight the major points:

She starts with the headlights and lamps. These are a mixture of xenon and LEDs They are very similarly laid out to the current U.S. Juke, but you can clearly see the new check-mark/arrowhead shape of the top lamp versus the current skinny strip. We'll see that come here as well, as it's a popular design trend across the Nissan line.

From there we see the new grille and bumper design.There are some subtle, but dramatic changes going on here. The grille is thinner and less openly pronounced while the bottom fascia going into the air dams is also less accentuated. This puts more emphasis on the new bumper, which juts out a little less than it did and has a more smooth, clean look to it. This is another thing we'll see on the new Juke here.

At the rear of the car, the rear lights mimic the front lights, as does the new bumper design. That will also come to America since it, again, brings more refinement to the crossover. One thing we may see dropped versus the European design, however, are the lower corner lamps in favor of an all-black honeycomb instead.

Ingham then talks about the new engine in the Juke, including the sixth gear for the transmission. This engine is a smaller, 1.2-liter turbocharged engine meant to power the two-wheel drive versions of the Juke that are popular in Europe. While we could see this engine in the U.S., it's not likely since the 1.6-liter now in the crossover remains for the all-wheel drive models, which are more popular here in the States. What we will likely see is the extra gear in the transmission, bumping it up to a six-speed. This would improve fuel economy and is an obvious next step for Nissan to take towards that goal.

The open glass roof is the next exterior point. This is a growing trend in the people-moving segment, appearing on several crossovers and small SUVs now as a premium option. It adds a lot of open feeling to the interior and is always a popular addition in our market.

Inside the car, she talks about technology. Most of this is technology already available in other Nissan vehicles in the U.S. The new NissanConnect system is a next-generation of the infotainment UI, while Nissan Safety Shield, Around View Monitor, etc. are already common in upper-level Nissans, so they'd be welcome upgrades for the American Juke as well.

After talking about the Juke NISMO RS, she goes to the great new paint color, Sunlight Yellow, and the personalization options available for the new Juke. Most of these will probably be available in the U.S. as well. (Love those wheels!)

Finally, she opens the rear hatch and shows the larger cargo area. This is a big improvement for the Juke, which already had a respectable, but still cramped cargo space. Forty percent more is a big leap and definitely will set the Juke apart from the hatches and larger crossovers it's often compared to.

Our guesses about which of these features will come to American shores are our own, of course. Nissan has not debuted the North American redesign for the Juke (yet). When they do, we'll know for sure, but we're confident that our deductions are very close to how it will be.