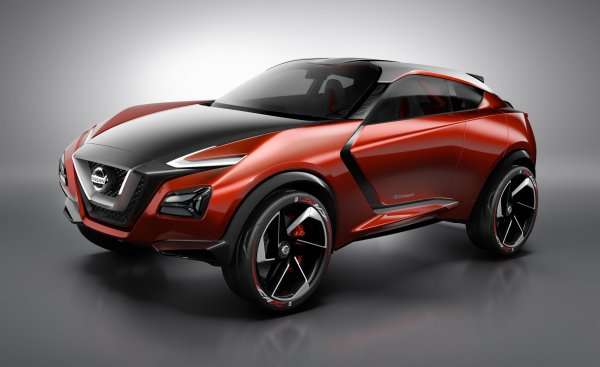 There's no denying that the Nissan Juke has taken the compact crossover market by surprise, being one of the founding models in that segment. Now, Nissan sees that going a step further, combining elements we've wanted to see from Nissan all along.
Advertisement

Nissan has finally unveiled the hot new Gripz Concept at Frankfurt. Melding a bicycle, a 240Z rally car, and the latest in hybrid-electric technologies, the Gripz has everything we've ever wanted to see in a Nissan, and then some.

Ever since the Juke NISMO was introduced, we've cried for a rally-ready vehicle from Nissan. The Juke NISMO is very close, but needs some tweaks to move its focus away from the street and into the dirt. Since Nissan does not (currently) have a rally team, though, it's unlikely that they would make these moves. Or would they?

The Gripz Concept seems to throw that notion out the window. Inspired by a bicycle and the way it melds the rider to the ride, the Gripz pulls its credibility from Nissan's past in desert rally racing. It also showcases some new design language that we expect to see in Nissan vehicles going forward, namely in their sportier crossovers such as the Juke and perhaps a future model based on the Gripz.

The Gripz starts as a two-door coupe-style crossover, with elements of a sports car's silhouette and the beefier stance of a crossover. The look and color of the concept are an homage to the Nissan 240Z, which competed in the Safari Rally in the 1970s.

Beneath the edgy design is a series hybrid powertrain called "Pure Drive e-Power." We know nothing more about it other than it's a gasoline engine and electric drive system mated into a four-wheel drive drivetrain. Other than that, there are no details on the concept's physical motivation. The following quick "commercial" for the Gripz emphasizes it's green nature.

The interior of the Gripz is also far out there. The front door opens to allow a suicide-style rear door to open for access to the rear of this 2+2 coupe-like crossover. Inside, seating is futuristic and sculpted while dash and console lines flow fluidly in arches designed to accentuate the rounded bezels of the instruments and controls. A lot of "bicycle" can be seen in this interior.

Although Nissan is not saying whether the Gripz would eventually become a production model, we feel it will. This statement explains why: "Nissan pioneered the idea of the compact crossover, and this is reflected in the enormous popularity of Qashqai and JUKE and the resulting growth of the market segment as other manufacturers play catch-up,"said Shiro Nakamura, senior vice president and chief creative officer, Nissan Motor Company, Ltd."While the Nissan Gripz Concept is not seen as a direct replacement for either of those two iconic vehicles, it does show the extremes to which the compact crossover can be pushed."